Behold! An idea that worked!

Well, it's not actually that startling...

Ahem. I had an idea for punches. If you've messed with the things, you know that, especially in smaller sizes, when you have a stuck or very tight pin they have a bad habit of bending. And you can never get them actually straight again. So I thought of making the actual punch part replaceable. I won't have a tailstock spindle and drill chuck for the lathe for a while, but a thought occurred: face-off the ends of the body so they're square, then on one end use a right-cutting bit angled close to straight-in to cut a small hole; that way you'd have the center marked to start the bit*. So I tried it, and it worked. 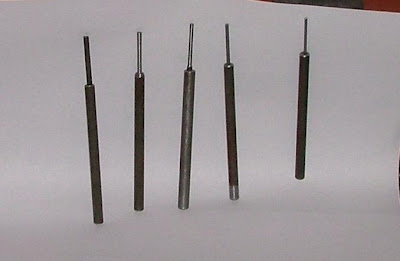 From 1/8" down to 1/16". The first three are some 1/8" stock I had, 2nd and 3rd turned down on the drill press with a file(too small for the chuck on the lathe), 4th and 5th are music wire. Was able to drill the holes just undersize enough on four to make the pin a drive-fit, the last was a touch loose so used a drop of threadlocker. So if I damage one, I should be able to pull it and replace it.

If I could find a tap and some screws small enough(these bodies are 1/4") I could drill and tap from the side and use the setscrews to hold the pins. Maybe bigger bodies.

It's nice when something works.


*No, it's not absolutely required to have them dead-centered as long as they're straight, but dammit, I wanted them centered.
Posted by Firehand at 15:06

Actually, it makes great sense.
You can easily find 4-40 taps and setracrews, whcih is what you need for these. or buy collars with setscrews on them, and just slit the ends with a hacksaw and use the collar to hold the split closed.

Sounds like oversized primer decappers from a resizing die :)

That's a good idea; I'd buy a set.
Maybe instead of a setscrew in the side, something like a collet on a drill bit to tighten the thing up.
Until these become commercially available I'm reduced to using old drill bits and making emergency runs to the local machinist when things get stuck. :)

Og, I hadn't realized 4-40 taps and screws were so easily available; and you're right, that size works great.

Yeah, a locking collar would work well, too. Having a decent idea what I'm doing, maybe I can turn some sets out.