And while you're at it,

go congratulate Jawa for his part in getting a bin Laden buttmonkey thrown out of the country.
Posted by Firehand at 21:15 No comments:

Don't you just love how this stuff works? I started at

Curmudgeonly & Skeptical, which led to Mean Mr. Mustard which led to Relapsed Catholic which led to this place from which I found the Mark Steyn piece that started it all. Damn, by the time the year's out I should be back in fine fettle as a tracker.

Basically, Steyn points out that feminism should be very damn interested in the war on terror as it has freed a hell of a lot of women to do something other than either wear a tent and be escorted to go to the market or be easy prey to be dragged to a rape room. Doing so with his usual humor causes Murney to have a bad case case of the vapors; it seems that Steyn made mock of holy Feminism and was downright racist to boot. As someone once said(or should have) "If this be misogynism and racism, kick it up a notch, boy!"

Said vapors leading to statements such as "It is obvious that Steyn is a misogynist, and hates feminism, which means he opposes gender equality. How barbaric.", and, referring to the 'torrent of hate' directed at feminists, "That hate will climax when the United States Supreme Court overturns Roe vs. Wade, which will likely be in the not too distant future."

Never mind that if Roe vs. Wade is thrown out, that will not outlaw abortion; it will put the issue back in the individual states. That's not putting a matter into the hands of the state's voters, it's 'hatred for feminists'. To quote the Catholic, "This man actually publicizes the fact that he's a Women's Studies minor at the University of Regina (insert Beevis "heh") and has something called a Certificate of Administration in Continuing Education Development.

Meet the future of Canada, folks.

And the kicker: He calls himself a Libertarian. Kids, you can have 'im. Kate, I insist that you distance yourself from this Saskatchewan libertarian!"

No more need be said.
Posted by Firehand at 20:50 No comments:

Up over at Gullyborg.
Posted by Firehand at 19:17 No comments:

Assuming it's him and not dummied up(I'm still wondering why, if he's still in operation, no video?), lets see... You're not hurting us, we're gonna get you, we're winning but we'll offer a truce to rebuild Iraq.

Translation: "We're getting stomped, every time we come out to play you kill us, we haven't been able to pull off a real operation in America in years, so please accept our 'truce' offer and stop killing us. Don't you know you unbelievers are supposed to LOSE?"
Posted by Firehand at 13:58 No comments:

I know it's an estimated time, but damn!

FedEx was supposed to be delivering a package today. Checked the tracking data last night, showed estimated time of delivery 10:30. Ok, great, I'll be home then.

I understand 'estimated time', but dammit...
Posted by Firehand at 10:55 No comments:

Oh, the wonders of the ACLU

You know, that wonderful organization that defends civil rights? As long as they're approved of civil rights and/or plaintiffs, of course. Well, they've filed suit against the U.S.G. to stop the wiretapping of al Queda-related phone calls. Aside from the bullshit about 'widespread bugging of American's phones', there's some problems with the people in the ACLU doing this. Found this at Debbie Schlussel's blog:
"I'm not referring to the famous Plaintiffs about whom you've heard: For example, Christopher Hitchens, the well-known Vanity Fair writer who is tight with convicted felon lobbyist Jack Abramoff's money launderer Grover Norquist. (Norquist's receipt of thousands from Saudi charities raided by Customs for billions in Al-Qaeda money laundering is well-known, and Hitchens wrote glowingly of Norquist's efforts on behalf of radical Islam)." and goes from there:
"I'm referring to ACLU lawyers Noel Saleh, Mohammed Abdrabboh, and Nabih Ayad, the ACLU Plaintiffs named in the yesterday's Complaint, attorney William Swor, a member National Association of Criminal Defense Lawyers, and Nazih Hassan--all named in the lawsuit. They are exactly the kind of people whom the federal government SHOULD be watching, but probably isn't. One of these men admitted to funding Hezbollah, one was accused of tampering with a witness, and a third signed a document contradicting statements he made in the lawsuit. Not to mention, one of these men engaged in exactly the same "spying" (on me) that he now opposes when done by the NSA."

Yeah, some people in some branches of the ACLU have done some good things; and many people in many branches have done bad things. If the ACLU actually cared about justice and honesty, they'd throw these clowns out of the organization.

Further, check this out at Stop The ACLU for more information.
Posted by Firehand at 09:05 No comments:

I need to put this up at work 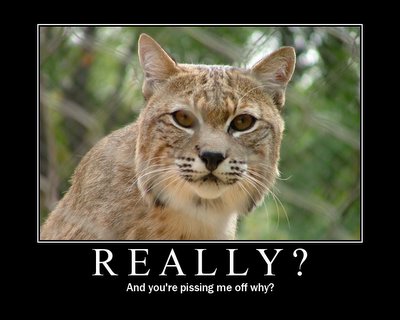 Posted by Firehand at 20:50 No comments:

Not the black-powder kind this time. Well, mostly not. Mr. Completely is putting together a meet in Reno NV in November, details here.

Did I mention pain hurts?

My back is easing off, but not fast enough. I'm beginning to feel like a dis dyks dyslexic pirate; every time I bend over or stand up I go "URRRRRR".
Posted by Firehand at 18:22 No comments:

Or, as Jeff Cooper refers to them, 'personal disarmament laws'.

Got a notice from Jews for the Preservation of Firearms Ownership(JPFO) about this article from San Francisco. Short version: abused woman thinks her husband may have found her, so under a CA law that "waives the permit requirement for anyone who "reasonably believes that he or she is in grave danger because of circumstances forming the basis of a current restraining order.'', she starts carrying a gun. Accidentally leaves purse at store, gun found &amp; police called; she went to jail because it turns out the restraining order which she thought was permanent had expired two months before.

She understands leaving her purse, especially with the piece inside, was bad; she now, because of the conviction, cannot even have a firearm in the house or pick one up for self-defense.

Joan Ryan, the writer, doesn't like guns. Here's the last paragraph:
"The law against carrying concealed guns makes good sense. But so many women every year are killed by their abusive boyfriends and husbands. Restraining orders, as we know, can't stop them. The police often can't stop them. I don't know what the solution is. But something's wrong when, in trying to keep herself alive, the terrorized woman becomes the criminal."

As I said in the e-mail I sent her, Joan, you can't have it both ways. If someone has the right to self-defense, they also have the right to the means with which to defend themselves, and for most people that's a gun. Firearms are not magic wands, you can't wave one and make troubles go away; they are damned effective tools for repelling boarders who come through the window at night, or attack you in a parking lot. But it doesn't matter how skilled you are or how great your need for it, if you don't have it with you when you need it, you're screwed. And the law you think makes such good sense has now prevented this woman from even owning this means of defense, ever again.
Posted by Firehand at 08:44 No comments:

I wrote a few days back about when the personal disarmament people really got my attention. Kevin read it and asked the question, and got a lot of comments.

You ought to go read them.
Posted by Firehand at 20:31 No comments: