You need to read this

over at Publicola, Culture. As soon as possible.
Posted by Firehand at 20:40 No comments: 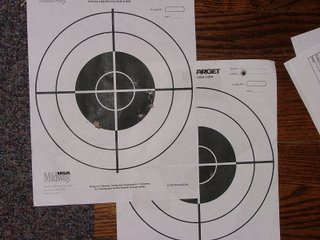 Pulled a little low, but all in the good black. This is actually one of the nightmare scenarios I used to have. Loading, aiming and firing with that in mind, I'm surprised it came out this good. I did shoot two-handed, didn't think to take the flashlight with me to shoot that style.

Killiards, on the other hand...
Offhand: 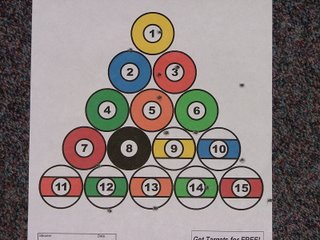 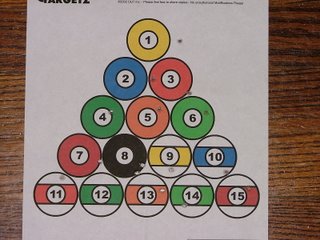 Shot with a Ruger 22/45 and iron sights. Note to self: do NOT shoot for score on targets like this:
a: after something like Head-shot
b: when tired
c: when hungry. I just couldn't seem to keep things steady offhand. Not making excuses, I know I can shoot better than this, just didn't manage it this night. These are so damn lousy I hate to enter them, but I will.
Posted by Firehand at 17:42 No comments:

Being about as organized as the security trainee(aka younger dog, aka "You little !!*&#"), I did not think to post these until now. So here they are:

At Mr. Completely, it's currently killiards for handguns & airguns.

At MY1911.com, it's 'Head-shot', simulation for one of the nightmare home-defense situations.

Check 'em both out. I shot last night, will try to post on it tonight.
Posted by Firehand at 06:07 No comments:

Found his place after he commented on a post. Some interesting stuff from a (re)new shooter who's only been popping targets for about a year. Check out The Pistolero and see what you think.
Posted by Firehand at 19:07 No comments:

Why Kim is right about the Stupid Party(R)

The Stupid Party is working hard in too many cases to piss off voters; the Evil Party is doing crap like this to try to gain votes:

Look at their map and tell me, please, why some of these people shouldn't be jailed for working against this country?

And why anybody who cares about the sovereignty of this country would vote for any 'D' candidate who has anything to do with this crap?
Posted by Firehand at 05:59 No comments:

Spent the evening at the range with a friend- her second time- getting her used to her sidearm. Again.

'Again' because had originally taken her almost a year ago, and just now got a chance for a second visit. And since she'd not done any practice on her own- not even dry-firing as it turned out...

Have you ever noticed that how someone acts, even if it's not their real self, influences or even becomes their self? That was the case here. She's a teacher of small kids, and has a tendency to act around other people the same way she does around the kids. And in doing so, works herself around in ways that may not be good. In this case, nervousness about guns.

We'd pretty much gotten through that in the past, but it was long enough ago that had to work her through it again. At least it did work; by halfway through had gotten her to actually take notice of what she was doing, and she started to settle down a lot. And consequently, started shooting pretty well. All at home-defense ranges with her S&W model 13.

This was a case of her hearing various crap about firearms, and basically talking herself into being jumpy and nervous(mind you, she used a .22 rifle many times as a kid). I mean literally talking herself into it; she'd start talking about the noise and flash and recoil and you could see her tightening up. However, progress was made, and I think it'll hold better this time. Especially if I can get her back to the range before too long.
Posted by Firehand at 19:33 No comments:

For further on the continuing idiocy in Britain,

to to Kevin's place and look here(note: link corrected)

Ref the mess on how to treat various crimes in Britain(my piece here, links to the Kim and the original story there), some of the reaction from the public:
"Are the government losing their minds? My friends frail parents aged 80 and 82 were robbed in their home while they watched TV in the lounge. Their bedroom was a total mess and several items were taken including a watch that had belonged to their son who was killed in an accident.

Not content with the pain and suffering they had caused, the burglars phoned them the next day and verbally threatened them.

Give burglars a caution - they should bring back birching!

Having been burgled recently I now come to work in dread of what I may find when I get home. If they do not want to send these scum to jail then they should be taken to the market square and flogged.

Typical of this government. Talk about honour among thieves. It won't be long before it will be the victim who gets locked up for putting temptation in front of weak individuals. It is time they went before we have a revolution in the streets, Paris ain't that far away!

When the actual working people of Britain are this pissed, there may be some hope. Though I'm doubtful; the government seems willing to put a lot of energy/power into protecting criminals and people threating to burn the country down while stomping hard on anyone who dares to demonstrate about it. And with so much of the British power structure tied in to protecting the bad guys...
Posted by Firehand at 19:02 No comments:

After looking over some things at the last Carnival, and remembering some others I'd read, had some thoughts to put down.

You're at a restaurant. Sitting at table, having a good dinner, and the "Oh shit!" situation happens. Every tried drawing from an eating position? Try it. Make sure your piece is unloaded, holster it(or pocket or purse it or whatever), and sit down at the table. Make sure you're sitting as you normally would, then pick a spot as armed robber/kidnapper/terrorist/whatever that just came out with a sub-gun or something from under a coat and draw. I mean actuallydraw, like you would for real, fast and trying to get lined up on the bad guy fast. It ain't that easy. If you don't watch it you may bang the barrel on the table as you try to raise it, or bang your elbow on the back of the chair(I did that once in practice and nearly dropped the gun; I doubt I could have shot accurately with a half-numb arm). And depending on angles, you may find yourself having to fire one-handed at an odd direction; you can't always kick the chair back out of the way, or might be in a booth. So try it.

Someone(may have been the Geek) mentioned reading of some ladies taking a chair to the range and setting up to practice as if sitting in a car when a situation you can't drive away from happens. Think about drawing, getting it past/over/under the steering wheel and pointed out the window, then firing. Again, quite possibly one-handed.
UPDATE: this was at Hell in a Handbasket, here at 'Avoid the Bucket', taking notice of this post at The Cathouse.

As various people have pointed out at different times, you need to get out of the habit of standing in a solid position and firing. If a bad guy is shooting/cutting at you, you need to be moving; away to the side, or maybe- in some circumstances- towards him.

Have you ever tried to shoot accurately at a silhouette while actually jumping around? Or running?

If you've got a place where you can safely try it then do. Next time you shoot. In any case, take your unloaded piece and try it on some target at home; it's liable to surprise you. (Note: soft-air guns are great for this. I used to have a 'snarling robber' silhouette on the wall with the sticky target hung COM) If you can't actually run around(please don't scare the range officers and/or other shooters), try just shifting left-right and back, or a step back and forward while shooting.

And, again as has been pointed out by others, start looking for/thinking of cover(remember: concealment hides you from sight; cover actually protects you). Most bad guys can't seem to shoot worth crap, so if you can shoot from behind something that'll actually protect you from any accurate shots, you go home and the bad guy goes to jail or morgue. Which is the proper outcome, after all.

I've come to think that doing almost anything different from standard practice is helpful, if only because it breaks you out of the standard line of thinking about shooting and better prepares you. Remember the 'practice as you plan to fight' idea. Because, as Bill Jordan said, there's no second-place winner in a gunfight.
Posted by Firehand at 18:34 No comments: