Couple of things this morning

before I take Security Staff to the vet:
Have I mentioned that, overall, Coburn is one of the politicians I can actually be happy is in the Congress?
Instead of passing a $33.5 billion measure funding energy and water projects and then moving on to other business, the chamber slogged through a 30-hour protest by Sen. Tom Coburn, R-Okla., who halted further legislative business after one of his pet ideas was dropped from the bill.

At issue is one of Coburn's top issues — greater transparency in government — as well as his sworn enemy, the powerful Appropriations Committee. Coburn had added to the energy and water bill a provision requiring reports that agencies are required to send to the appropriations panels be made available to other lawmakers and to the public. It's part of his drive for greater transparency in government.
You'll notice MSNBC refers to it as Coburn's 'pet idea'; nice way to diminish it, huh? And to ignore that Obama promised 'transparency' and has lied every step of the way.


You want to know just how bad the Baucus Tax You To Death For Healthcare Reform would be?
Most astounding of all is what this Congress is willing to do to struggling middle-class families. The bill would impose nearly $400 billion in new taxes and fees. Nearly 90% of that burden will be shouldered by those making $200,000 or less.

It might not appear that way at first, because the dollars are collected via a 40% tax on sales by insurers of "Cadillac" policies, fees on health insurers, drug companies and device manufacturers, and an assortment of odds and ends.

But the economics are clear. These costs will be passed on to consumers by either directly raising insurance premiums, or by fueling higher health-care costs that inevitably lead to higher premiums. Consumers will pay the excise tax on high-cost plans. The Joint Committee on Taxation indicates that 87% of the burden would fall on Americans making less than $200,000, and more than half on those earning under $100,000.
Once again, Obama's promise to not tax anyone making less than $200k was a flat lie. And Baucus wants to ram this crap down our throats. 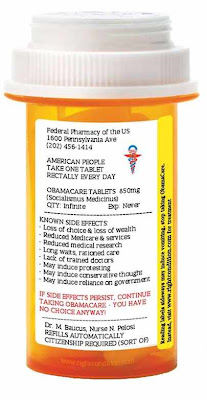 Looks like at least part of Snowe's price to be a turncoat(again) was to get your money to save Maine from paying the price for their 'public option' insurance plan.
The Democratic legislature tried to replace this funding mechanism with a tax on beer, wine, and soda, but Mainers exercised a “voters’ veto” and repealed this tax via referendum. Running out of money, the legislature went back to taxing Maine insurance companies (and, by extension, private policyholders), enacting a 2 percent tax on all paid insurance claims. The state also has capped enrollment in order to keep costs from spiraling further out of control. The program’s supporters are now looking to Washington for help. “We have a very limited capacity because of limited resources,” Maine Office of Health Policy and Finance director Trish Riley said recently. “With federal money, more people would become eligible and the federal government would require people to have coverage.”

Obamacare would relieve a handful of northeastern states, including Maine, of the burden of funding their broken, heavily regulated and subsidized health-care systems while imposing new burdens on the South and Midwest in the form of expanded eligibility for Medicaid. Of course Snowe voted for this bill. It's a bailout for Maine.
One of the things that disgusts me about so many politicians is how they're willing to screw the whole rest of the country for their own and their district or state's benefit; in this case, she's willing to have the taxes of everyone in the country go through the roof, AND screw with our health care, to bail Maine out of paying the price for their own screwups. Well, screw Maine; they put their messed-up system in place, they should not get to pick my damned pocket to pretend to fix it.


Now if you'll excuse me, Security needs her rabies booster.
And I stole the Baucus Prescription from Denny