With one thing and another, haven't had much to write lately

Work with strange shifts, trying to get enough sleep, not much time to do anything and then Security Staff(Senior) passing on... it all kind of drains the enthusiasm out of you.

So I thought I'd just post some links, in case you haven't run across these things yet.

From Kim, his opinion on the 'Illegal Immigrant Amnesty By Another Name' bill. I'll second him on the pissed off, though I have the slight mitigating factor that both OK Senators voted against this mess and have made their opinion of it very plain. I'll add to it that the only reasons for them to be surprised by the anger on this is
A. Abject stupidity(quite possible)
B. Acting(also possible)
C. Actually believing they could say a few words and have everybody go along. Though I think this one would be a side-link to 'Abject Stupidity'.

Take a look at these grips Xavier tested. I don't know about the bone, but I like the buffalo horn on the maker's site.

Remember I mentioned a while back word that the Yugo government, in keeping with a treaty they'd signed with the God-cursed UN, would stop exporting arms and ammo? Got this today in an e-mail from Century:ITS DEFINITE NO MORE YUGO SKS’S AND YUGO UNDERFOLDERS GET THEM NOW WHILE YOU CAN
The price on them has been going up(along with everything else), and this'll only make things worse.

One of the things about the current IIABAN bill is the emotion being used by some of these clowns to try to sell it. Both the 'teary-eyed children' crap, and- the one that REALLY pisses me off- is the comments(especially by people who damn well know better) that "Anyone who's against this bill is a racist". Let me state that if either my Senator or Rep. had said such a thing, not only would I have told them exactly what I think of them, I'd do everything I could to see them out of that office.

Also note, from His Majesty and Michelle Malkin, phone numbers to the House and Senate that bypass some of the usual crap needed to get to them. Where'd the numbers come from?
The hotline is paid for by something called the Coalition for Comprehensive Immigration Reform and it’s being blasted to pro-open borders groups all over the country. The hotline gives its callers access to their senators that average Joes don’t have.
The numbers are;
1-800-882-2005. (Spanish number)
1-800-417-7666. (English number)

Don't you just love it? A Spanish number for people who apparently can't or won't speak English to yell at the Senate and House?

And last, from Michelle, a bit about the way the murdering fornicators-of-swine we're fighting treat people. And the absolute friggin' silence from the usual suspects who whine about us even daring to fight them.

I'm going to try to enjoy this weekend. Catch you later.
Posted by Firehand at 09:37 No comments:

This is one of the firearms from former com-bloc countries that have become available. It was the Czech replacement for the CZ-52 pistol as a military sidearm 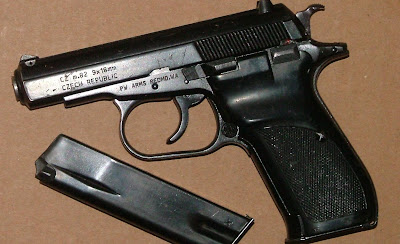 The -52 was a single-action semi-auto chambered for the 7.62x25mm cartridge, which propelled a 90-grain bullet to about 1400fps. SERIOUS penetration, and a fireball at the muzzle that does indeed get attention at the range. The -82 is smaller(6.77" long, 4.99 high, 1.42 wide), double-action, weighs a shade over 28 oz and is chambered for the 9x18mm cartridge. Where the -82 used a single-stack magazine that holds eight rounds, the -82 uses a double-stack that holds 12.

The -82 has an ambidextrous thumb safety, can be carried cocked & locked, and has white-dot sights. And one interesting characteristic: polygonal rifling. Which at first glance causes it to look like a smoothbore.

Takedown is much like the Makarov and the Walther pistols: drop the magazine, pull down the trigger guard at the front, pull the slide all the way back, lift the back up a bit and ease it forward off the barrel and that's it to field-strip. It feels a lot like those pistols, too. The workmanship seemed quite nice, everything well fitted and smooth working.

About that double-action. Firing the first shot, just pull the trigger or you can cock the hammer first. And, as mentioned, you can carry it condition one(no idea how secure the safety is on this point so cannot say if a good idea or not). Since there's no decocker, to lower the hammer on a live round means holding the hammer spur with one thumb, pulling the trigger and easing the hammer down. Could be just a bit touchy at times.

How'd it work? Quite well. Fired it with some Wolf ball and Silver Bear hollowpoints. Recoil is just like the Makarov, which means- for me- a touch uncomfortable after half a box or so; very snappy. I don't know if something like the Pearce grip that helps on the Mak is available, if it is and I planned on shooting one of these much, I'd get it. Accuracy was much like the Maks I've fired, quite good, especially since this has much better sights than the Mak. At ten yards it printed all shots about two inches below point of aim.

They generally come with a holster designed to allow for either left- or right-hand carry that also holds the extra mag and cleaning rod, I'll try to get a picture of that and add it on later.


Had a chance to try one of these out a couple of weeks ago and with one thing and another finally got around to writing about it.
Posted by Firehand at 17:28 1 comment: 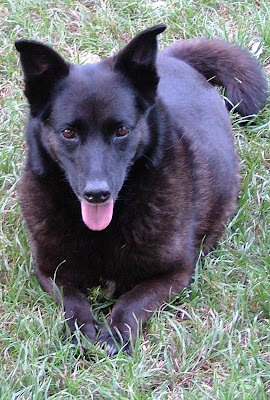 Security Staff(Senior) died this morning.
Posted by Firehand at 13:24 No comments: