For the low price of only a little time, you can help save

humanity from the AGWmongers.
If you are comfortable using excel and converting text files to data tables and overlaying graphs or screen shots, you too can help prove whether man-made global warming is real or a crafted statistical mirage!

Reader grumpguy went to the NASA GISS site and pulled down data for one station in New York. What he found is no surprise – another example of raw station data being ‘adjusted’ to show recent warming.

He even did us all a favor by graphing and posting his results on the internet (imaging if alarmists were so forthcoming). He compared the raw data with the GISS ‘adjusted’ data and the evidence is clear: 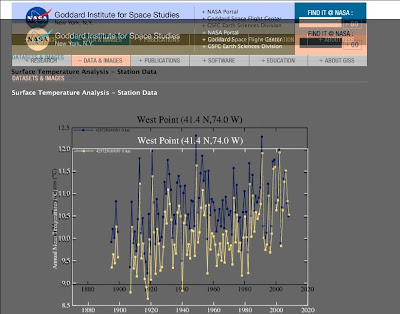 1. The temperature scale as been dropped a magical 0.5°C (y-axis on left) in the ‘adjusted’ data.
2. The last few years of temps are used in both data sets – another version of “Mike’s (Mann’s) Trick” of using unprocessed sensor data to give the impression of warming.

GISS pushed down the earlier temperature record to make it look like it was cooler than today, when in fact there has been no significant change over the entire record. The adjustments are clear as day, as is the growing mountain of evidence that the raw temperature record is proving one of the two climate model predictions right.

MUCH more at the link. And thanks again to Keith for it
Posted by Firehand at 06:45