Currently it 7 degrees outside; the wind is down 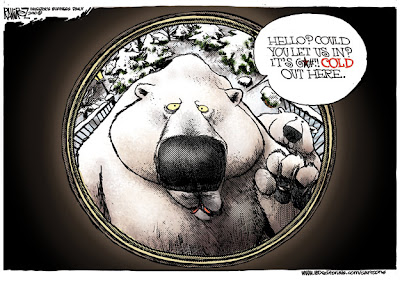 but it's still nasty. Security Staff came out to take one look around, grab a munchie, get a drink and run hide. So I'm not taking a walk this morning, either. Thanks to Theo for the pic.

Good question, why IS the State Department getting a pass on their screwups in the most recent terrorist attack?


Texas spends less on education but gets much better results than Californicated; anybody surprised?


As Pakistani security forces take over more Taliban facilities in South Waziristan, they are horrified to find religious schools that specialize in convincing poor, rural teenagers to be suicide bombers. It only works on a few percent of the students, which is why there were so many of these schools. Captured suicide bombers in Afghanistan had freely discussed these schools, but this is the first time Pakistani officials have been able to examine them closely. The Taliban have developed a curriculum that combines religion and Islamic radical preaching, and the promise of sex and luxury living, to produce suicide bombers. Lurid details of all this are being widely reported in the media, fueling even more enthusiasm for continued efforts against the Taliban. In the last three months, Taliban terror attacks have killed over 600 people, most of them ordinary civilians.

In Pakistani Kashmir, a suicide bomber attacked an army base near the Indian border, killing three people. This is a rare and disturbing event. The Pakistani army in Kashmir has long supported Islamic terrorists training there, then crossing the border to fight Indian troops and kill non-Moslem civilians. Pakistani troops often fire on their Indian counterparts, to make it easier for the Islamic militants to sneak across the frontier. But in the last few years, troops have also been ordered to close some terrorist camps (those suspected of being responsible for attacks against Pakistani officials, or Indian cities.) Some Islamic militants have decided to escalate, and use terror to intimidate the army. Some mainstream Pakistanis blame these bombings on Indian agents, intent on causing discord between Islamic militants and the Pakistani army.
Yeah, it MUST be someone else's fault, right?


Wow, a bunch of party insiders are mad at someone who's A: popular with lots of people and B: won't kiss the ass of the insiders; and we care why? Especially since so many of us would like to see the insiders bouncing out the door on their ass?


My one problem with Ray's video

is I'm strongly tempted that a lot of these people don't need to wait 'till the next election: they need to be treated with tar & feathers NOW.

It is staggering to try to grasp the naïveté of the Obama Administration in leading us down this path. The only thing that makes it comprehensible is their staggering naïveté in going to Copenhagen for the Climate Conference. Obama and the gang -- let's face it -- live on the myth that they are poor little college graduates armed only with their law degrees, taking on the big bad businesses that are worth millions and billions and zillions of dollars. All they have to do is make a convincing case to the general public and they can start redistributing all that wealth.

What never occurs to them is that, in the eyes of most of the world, they're the undeserving rich. Obama went to Copenhagen and found himself facing representatives of millions and billions of people saying, "Give us money, too." And of course Obama & Co. all too ready to cough up some loose change out of America's pockets -- although the taxpayers are not likely to agree with them.

Now Obama and his administration are going to get a lesson in what it means to try to extend the niceties of the American criminal justice system to a world full of potential terrorists.


Hmmm, why would these terrorists be in New York City, I wonder?


I'll say the same thing I said after hearing about some of the failures that helped lead to 9/11: there are people in the FBI and intelligence agencies and the Justice Department who should be fired. And some of them, I wish there was a way to prosecute them. Criminal stupidity or something would be fitting.


Let's see, they'll have to build a 'supergrid' to spread the electricity around, and special setups to supply the building and maintenance of the windmills; I wonder what the plans are for when storms cause them to be shut down, or ice closes or damages big areas of them?


And an Iranian opposition leader survives someone trying to whack him. Good news, that.

And wow! Louisiana isn't waiting for the next election!
A petition to recall Corruptocrat Senator Mary Landrieu has been accepted for filing by the Louisiana Secretary of State. It was reported this week that Landrieu took Obamacare bribes from Senate Majority Leader Harry Reid to bargain for national democratic support for her brother’s mayoral campaign. She also was accused of taking a $300 million bribe for her Obamacare vote.
Posted by Firehand at 08:00