just great.
As Susan notes below, a bipartisan group of lawmakers is urging the Obama White House not to go forward with plans to send a number of Yemeni terrorists now being held in the Guantanamo Bay detention facility back to their home country. But the Obama White House insists it will continue to send those Gitmo inmates to Yemen -- a country now recognized as a hotbed of terrorism so dangerous that the U.S. has decided to close its embassy there.
Because the number of terrorists already released and causing more problems isn't enough, or not bad enough to further upset his 'progressive' base or some other idiocy. 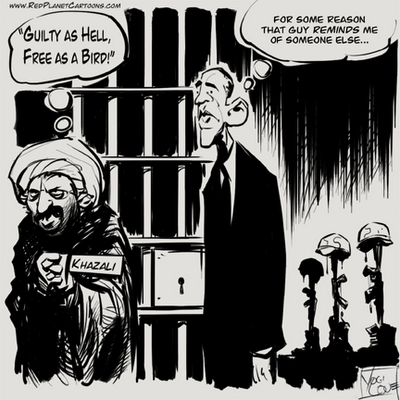 He wants the Postal Service do take care of this? Oh, come ON, I know he wants to suck up to unions but DAMN. Or, to borrow a line from a Drake book, "Did a computer blow a circuit or did some dickheaded human actually think this was a good idea?"


Happy New Year, readers, but before we get on with the debates of 2010, there's still some ugly 2009 business to report: To wit, the Treasury's Christmas Eve taxpayer massacre lifting the $400 billion cap on potential losses for Fannie Mae and Freddie Mac as well as the limits on what the failed companies can borrow.

The Treasury is hoping no one notices, and no wonder. Taxpayers are continuing to buy senior preferred stock in the two firms to cover their growing losses—a combined $111 billion so far. When Treasury first bailed them out in September 2008, Congress put a $200 billion limit ($100 billion each) on federal assistance. Last year, the Treasury raised the potential commitment to $400 billion. Now the limit on taxpayer exposure is, well, who knows?
Because Rep. Barney Frank(So Corrupt And Arrogant It's Amazing-MA) hasn't wasted enough of your money yet.


Evil Party candidate supported by union thugs; no surprise.
Stupid Party not supporting someone who's actually a conservative type; no surprise, either. And a fine example of why I refuse to give any money to the Stupid Party until they pull their collective head out.


The hysterical or insane(do we have to pick just one?) Sullivan is yelling 'racist' at anyone who says unkind things about that picture of the President. As Ace says, Andrew Sullivan has trouble understanding how someone widely believed to be an arrogant dick might be poorly served by a photo of him with an arrogant dick expression on his face. And Insty's reply is ...Well, that’s the last refuge of the Obama fans these days, isn’t it? But Biden’s role here isn’t as a white man. Obama’s showing contempt — or so it seems to me — for the guy he picked as his running mate. Which, considering Biden, isn't real surprising(ask me what I really think of him), but to hit the big point again: for the White House to think this was a good picture to put up is just amazing.


From Where Great Britain Used To Be,
Hate preacher Anjem Choudary of Islam4UK, a branch of the radical al-Muhajiroun movement, has planned a march with coffins through Wootton Bassett in the coming weeks. He planned his anti-UK march along the same route that is used to return troop’s bodies killed in Afghanistan. He wants people to be aware of the million of innocents lost during the Afghanistan War. Choudary blames the UK for the deaths.
...
As more than 190,000 people signed an internet petition objecting to the march, Anjem Choudary said he had chosen to protest in the town – renowned for honouring soldiers killed in Afghanistan – because it would attract ‘maximum attention’.

Prime Minister Gordon Brown said today such a march would be ‘completely inappropriate’.

But in remarks designed to cause maximum offence, Choudary compared fallen British heroes to Nazi stormtroopers and the September 11 and July 7 terrorists. He even claimed his plan was backed by families of servicemen and women.
And if past history holds true, the cops will threaten and maybe jail anybody who dares to counter-protest for 'hate crimes' or something.


Climate Change: is there anything it can't do?
Good grief. Two-thirds of the United States is below freezing, orange crops in Florida are being destroyed, the world is seeing record low temperatures, yet we're told it's getting "hotter" and the miserable failures of Copenhagen are to blame.

The idiocy just never stops.
And, of course, we're supposed to pay people off for this. I'll note that for the past while Oklahoma has been as much as 15-20 degrees below norms for this time of year, and it looks to be at least that bad for at least the next week. Al Gore, you bastard, who let you in here? And in the homeland of the CRU,
Scotland’s icy roads are hours away from gridlock as local authorities begin running out of salt in the longest period of cold weather for 20 years, council officials said last night.

The prospect of the country grinding to a halt as the holiday season ends was raised after thousands of drivers spent up to three hours in an eight-mile queue north and south of the Forth Road Bridge on Saturday and endured a further day of severe conditions yesterday.

Bob McLellan, Fife Council’s head of transportation, said that its suppliers did not have enough reserves of salt and the county faced running out this morning. The problem was being repeated all over the country, he added.


… “Closing the embassy in Yemen last night? No one wants State Department officials put at risk, but that is a sign of weakness. Closing the embassy? We can’t protect our own embassy in Yemen, a place where we have special operations forces. A place we say we’re working with the government on the front lines of the war on terror? And there’s a terror threat, and we close the embassy? That’s a victory for al Qaeda. This last week has been a victory for al Qaeda in that region, I’m afraid.”
Hey, if he actually acts to protect the embassy, it's admitting what he doesn't want to: real threats that'll require real action to deal with. And he'd rather see people die here than do that, it seems.


Awww, Canada is worried about airline passenger privacy. And our government won't even stand up to THIS.


You know, it wasn't that long ago that the response to this would involve the British Navy, Marines and a trip to the pirates home town. Now?

Damn, it's cold outside. But I have to go out there anyway.
Posted by Firehand at 08:09

About ten years ago, as the global warming religion was getting heated up (sorry, couldn't resist), I noticed the local tv weather talkers would give the day's high and low temperatures and also whether it was a record for that day. This went something like "this is the hottest February 32nd since 1874, or 1932, or 1915. I noticed that it was never "hottest Blabbity blip since 1990, or 1995, 0r 1998, which one would expect if one were actually living in the years with temperatures represented by the blade of the hockey stick. The distribution of records over the past 120 years for which we actually have records was sort of random. If the global warming was actually happening, the breaking of record temperatures should have occurred something like when a stock price on the New York Stock Exchange rises to new highs: Every day is a new record, breaking the record of the day before.

You would think it would be more consistent, wouldn't you?