I ask you, does this not look 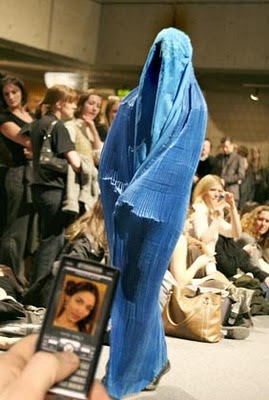 like a somewhat prettied-up Nazgul? But prettied-up or not,
Women who wear Islamic veils in public in France face a £700 fine under strict new laws being proposed.

The amount could be doubled for Muslim men who force female members of their family to cover their faces.
Yeah, that's gonna go over well with the disaffected north-African youths.

And the circus has begun at the Obama-Holder Terrorists Are Just Like Muggers trials.
A federal judge has tossed out most of the government's evidence against a tarrorism detainee on grounds his confessions were coerced, allegedly by U.S. forces, before he became a prisoner at Guantanamo Bay.

In a ruling this week, U.S. District Judge Thomas Hogan also said the government failed to establish that 23 statements the detainee made to interrogators at Guantanamo Bay were untainted by the earlier coerced statements made while he was held under harsh conditions in Afghanistan.
Posted by Firehand at 15:10