Every once in a while you'll run across one of these. At first glance you'd think it was a M1 Carbine*; closer examination says 'no'. I found this page on the history, which says they were originally made as training rifles for the German authorities after WWII, when they were using a lot of Carbines; later they were made for export. There was even a version made in .22 Magnum. The history includes this:
One of their larger markets was France, but they also exported these two models to the Far East (Thailand, Pakistan, and others) and South America (Brazil, Ecuador, and others). One customer was a South American country whose military issued the ESG 22 to their troops that worked in dense jungle areas and called the rifle a "jungle carbine". The Wischo director indicated that all of Erma-Werke's rifles were manufactured at Erma's facility in Dachau, and the stocks for the various E M1 based models were supplied by Sile of Italy.
Hmmm. For pest control and such I can see, but issued as a 'jungle carbine'?

The rear sight is plastic, and looks remarkably like the M1 Carbine Type III adjustable sight. The receiver is grooved for a standard .22 scope mount, and the sight slides on and is locked on by a screw. I'm told that a lot of the rear sights were lost over time, and you can find posts at forums like Rimfire Central asking "Where can I get one?" Usually the answer is "You can't."

The one I've fired was picked up used, and had a very light, clean trigger(almost too light). It had a problem: when the bolt started forward to chamber the next round, it would strip that cartridge from the mag and then seemed to drag on the next cartridge, causing it to not quite chamber the round. The owner didn't want to fiddle with magazine lips(his first thought was the next round was sticking up a touch too high, but mags are about as impossible to find as a rear sight so if you mess up the lips...) and couldn't figure out what was causing it. The problem was finally tracked down when he noticed the bolt felt like it was dragging slightly in the first part of travel back from the closed position, same for the last bit of travel before closing. We disassembled it(instructions here) and found that the machining on the bottom of the bolt was rough; hadn't been finished well at all. A few minutes with a fine stone to clean it up and then a few strokes with a hard Arkansas to polish and it slid much more smoothly; lubed and reassembled, you could really tell the difference. The next day he tested it and went through about a hundred rounds of three or four brands with no problems.

It was a fun rifle to shoot. As I noted, the trigger is almost too light, more like something on a match rifle than a plinking and small-game gun. The safety is a lever in the right-front of the trigger guard like the later M1 Carbine version. Shooting offhand it was easy to keep shots in a nice, tight group at 25 yards. Too bad it's not still in production, or something like it; I think it'd sell quite well(a M1 Carbine lookalike that uses .22 ammo? C'mon, there's a market there!)

I'll note, if you do find one, do stop at the basic stripping for cleaning; the insides of the thing are, ah, interesting. The trigger, for instance: 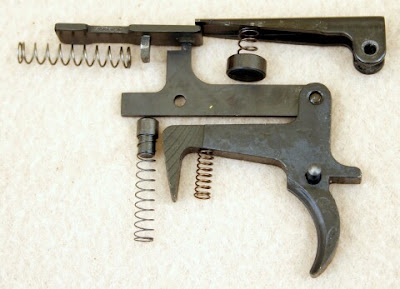 Don't know about you, but I'd rather not have to fit that all back together if I don't have to.


*I've read there were two versions: one had a magazine that looked just like the M1 mag, the other, more common, is angled, slimmer and longer, obviously for .22. The latter came in 5, 10 and 15-round versions.
Posted by Firehand at 10:53

There are a number of places on the web that are posting pictures of 10/22 actions custom-inletted into M1 Carbine wood (ar15.com, I believe, but I'm too lazy to check), and on the ODCMP forum there was one even inletted into a Garand stock.
The consensus by the commenters, most of whom lacked the woodworking skills to do this themselves, or the cash to pay to have it done, is that there is definitely a market out there.

That trigger is almost the epitome of "Superior German Engineering." Why use only three parts when you can make fifteen do the job?

Tip of the Hat to: Marko, The Munchkin Wrangler.

For some reason the thought of a 10-22 and a Carbine stock just didn't occur.

I think my brain's frozen.

Erma had all sorts of .22 look-alikes

I've never fired one, but a friend of the family had one.

Take that sample of one and make whatever conclusion you like of it, it wouldn't fire two shots in a row without messing up with a mis feed.

A friend had one of the Erma Werke .22 M1 Carbines. It worked pretty well with hi-speed ammo. Not perfect but pretty well. He traded it for a Marlin M60. which works perfectly with nearly any .22 LR ammo. If memory serves I think Marlin had a .22 LR M1 Carb. lookalike based on the M60.

I have an Erma Werke P08 copy and it works ok with selected hi-speed .22 LR. I'd sure like to trade it for a Ruger .22 Auto pistol because it's way too much like the Luger it copies. Pros: It is too cool looking for description. The mag. loads easily. It points naturally. Cons: The trigger is like dragging a piano across a gravel driveway with your forefinger in a loop of string, then up onto a high curb. But not in the good way.

Knew a guy who had one of the Erma Luger .22 pistols. Most 'maybe today' firearm I'd ever seen; when it felt like it it would work wonderfully, and when it didn't you couldn't get through half a magazine without a jam or FTF or something.

And that's the damndest description of a trigger I've ever seen.

On the web-site you linked to, there is a version called the Ranger, which it's thought wasn't sold in the USA, and it would seem the author doesn't know why the muzzle is threaded.
This would have been threaded to allow the fitting of a sound moderator, many countries in Europe allow these, and when used with sub-sonic ammo make for effective small game getters!

That would work very nicely for a small game rifle, true; nice & quiet. Or backyard plinking, where legal.

please, I need the address of a gun shop that has the EM1 Erma werker's needle in the state of virginia