in Norman, hadn't been there for several years. Nice place, lots of American Indian exhibits, lots of general natural history and a big section for dinosaurs and their ancestors. This building was opened about eight years ago(I think) to replace the original building, which was tiny. They also had samples and fossils and whatever in storage that'd been there, in many cases, for decades. And a lot of it, the labels or listings having been lost, they didn't know what was. As in, once they had the new facility far enough along to start opening things up, they found what turned out to be the biggest dinosaur skull known. I quote:
The newest record-holder is also a ceratopsian; Pentaceratops sternbergi, based on a new specimen just readied for display by the Sam Nobel Oklahoma Museum of Natural History in Norman, OK. The skull, including the 2-meter frill, is about 3.1 meters long.
...
The entire skeleton was dug up in the Four Corners region of New Mexico in July 1941. But the skull, still embedded in its rock matrix, was left in storage in the museum for years
because of the U.S. entry into World War II and the shutdown of the
scientists' funding source, the Works Progress Administration.
A ten-foot long skull, still in rock, sitting there since WWII. It's an impressive thing, I'll tell you.

The centerpiece of the dinosaurs is a full-size diorama of an apatosaurus being attacked by a saurophaganax, smaller than a tyrannosaur but still a big(36' long), impressive predator 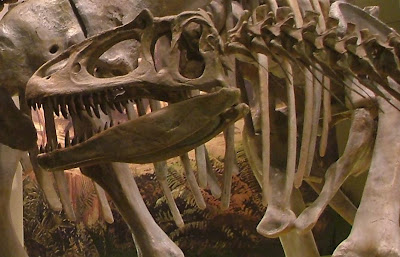 which somebody decided should be the State Dinosaur of Oklahoma. 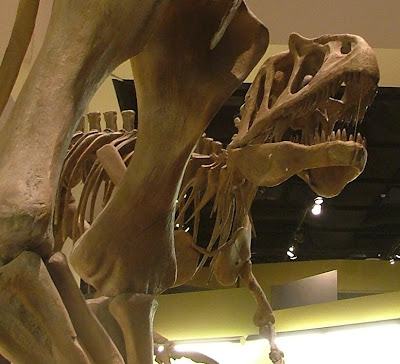 On that time & space problem? I think this was originally found in the 1930's, and not really examined until the 1990's.

One of the other dioramas includes a pair of dienonychus, one of them with a kill 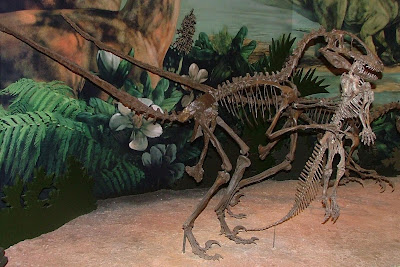 these little suckers only stand about four feet in normal stance; but I'd hate to meet one when unarmed. Small, fast, lots of sharp teeth & claws, including the big one on each foot.

There's a full-size bronze statue of a mastadon with a man, woman and dog nearby; just not enough distance for my camera to take the whole thing in.

It's a nice museum, well set-up. Like I said, it could probably stand to be at least twice the current size(I'm wondering what all else is still in crates somewhere.

Now, down to something I was thinking about, having recently read Time Safari and Tyronosaur(again): if you could go back to that time, what would you take?

Personal choices: for the big stuff, either a .30-06 or .375H&H with really good solids(maybe actual AP bullets), and a 12-gauge shotgun with slugs and buckshot. The rifle because the only way you'd actually be able to stop one of these, especially a big predator, is hitting the heart, spine or brain, and that means something with penetration out the wazoo that you can shoot quickly and well, for repeat shots if needed; with that, I'd rather have one of those than something heavier that I can't recover from as quickly. I'd spend a LOT of time practicing before making the trip, and studying drawings to know the aiming points.

The shotgun? If you ran into some smaller predators, up close, I tend to think a scattergun would be a very comforting thing to have available.
Posted by Firehand at 18:25

I'd be wanting to take one of these.
Some sort of burst-fire setting for it would be quite useful...

With decentralised nervous system and, if they were anything more like modern day crocs and gators, rather than modern day birds (arguably they are dinasaurs), a brain and muscles which work pretty well without oxygen...

or, to quote from Buck Weasel in ice age 3; good at "turning a T Rex into a T Rachael with a sharpened clam shell..."