The Irons in the Fire Box of Truth Updated

(Update is for velocity information)
I've had some loads I've wanted to test for months. First had to collect a bunch of water & milk jugs; a LOT, as the experiment with the M1 Carbine loads showed I'd probably need more than I might think. Then it was winter, then I kept getting tied up on other things. Yesterday I decided to get off my ass and do this, so the jugs were loaded and filled, the Box setup loaded, etc., and this morning went off to make noises and blow bottles up.

First, a couple of shots of my own Box of Truth setup(not to be confused with the original, found here; go look when you can, lots of good stuff). Notice the stylish carriage and eco-friendly construction: 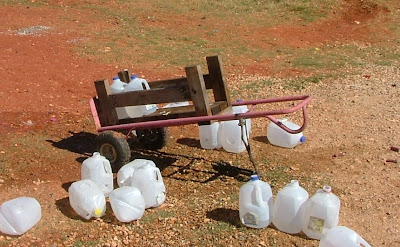 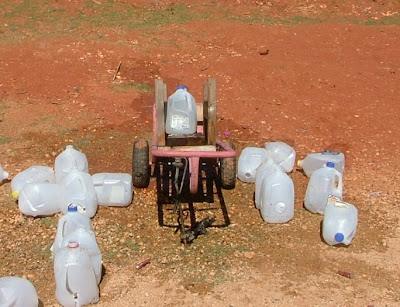 I have a jack I was going to take for adjusting it, but of course it was forgotten, so I had to prop the front up with something some jerk left at the range.

The handloads used worked well in these arms; doesn't guarantee they will in yours. If you try these loads, it's your responsibility.
I don't have the velocity on these loads, next time have a chance I'll take the Chrony along and check them and update this post with the information. I did weigh the bullets after. 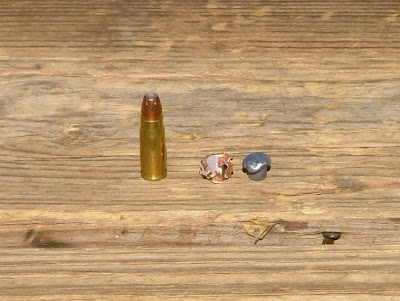 This is actually the second; the first I didn't have lined up quite right and it penetrated four jugs along the right side and apparently turned to the right enough to disappear; the second went center and penetrated four jugs completely, the core of the bullet was in the fifth jug and I found the jacket in the fourth. The core did upset nicely.
These loads penetrated a LOT more than I'd expected, especially being hollowpoints. Weight 84.3 grains including the piece of plastic stuck in the jacket folds, so lost about six grains. Velocity: 1300fps 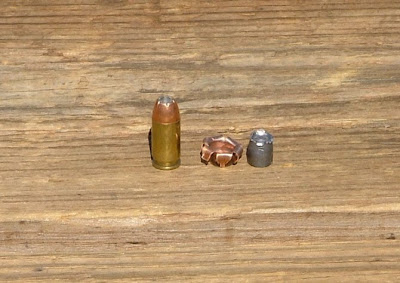 Again, this one is the second shot; the first went a bit right(yes, again), penetrated three jugs completely and tore a slot in the side of the fourth and vanished. This one penetrated three completely, jacket found in the third and core in the fourth; not much expansion. 94.3 grains total weight. Velocity: 820fps 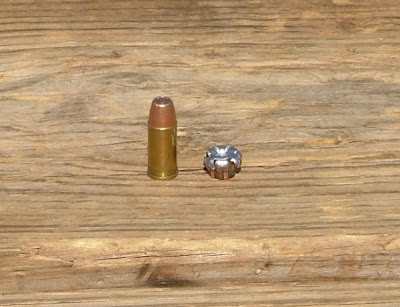 First shot penetrated two jugs completely and apparently turned a bit and cut a slot in the side of the third jug and went away; this one completely penetrated the first jug and was found in the second. There was a little bump on the back of the second, but not enough energy left to penetrate. Beautiful expansion.
However: after all was done and I moved the box I checked the ground and found this: 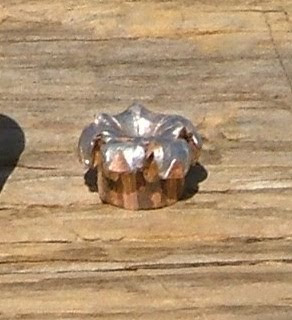 The first .32, also beautifully expanded; apparently enough energy to make it out of the jugs but then just fell to the ground. One weighs 60.0, the other 59.9; excellent weight retention. Velocity: 857fps 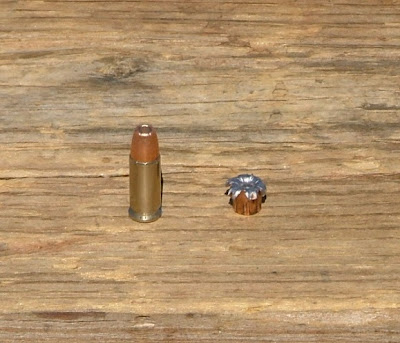 One jug completely, a good-sized bump in the back wall of the second, in which it was found. I was really surprised at how well this little sucker expanded. It also weighs exactly 35 grains, so lost no bits in the process. Velocity: 900fps

The last planned shot was a practice load, .45acp using a X-treme plated 200-grain HP, Federal case and 7.0 grains of Unique; I just wanted to see if this bullet would upset at all. Nope. 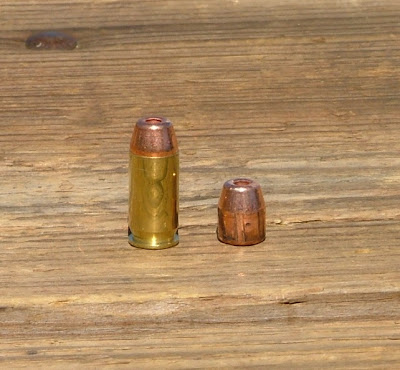 The nose shows barely any deformation; if it weren't for the rifling marks on the body you'd think it was a new bullet. This sucker penetrated all five jugs and left 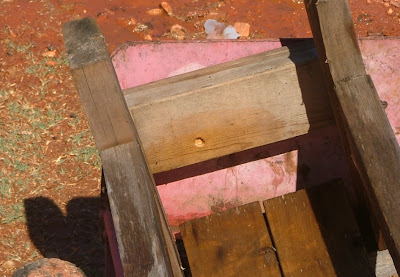 a nasty dent in the 2x4 back piece of the box; if the last jug hadn't been butted up against this the bullet would've been found laying on the bottom wood. A LOT more penetration than I expected. Velocity: 850fps


After all this I had two jugs left, so just to try it I shot them with a Federal bulk-pack 36-grain HP out of the AR15-22. This penetrated both jugs and was found embedded 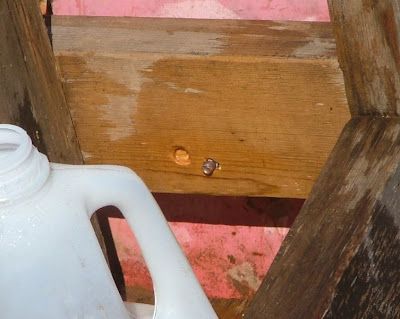 in the back board. I waited 'till home to get it out; it would wobble a bit but was stuck, so I cut around it a bit so I could see it undamaged: 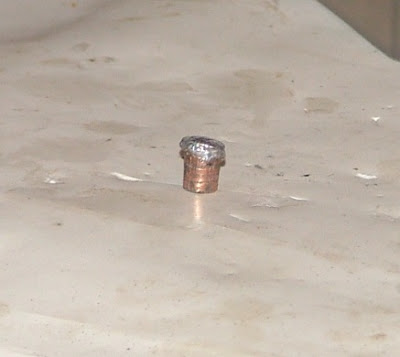 Not much expansion, pretty good penetration. The box says 36-grain, but this weighs 37 even on my scale.

So that's my results for the day. Now I have to start collecting jugs again.


Couple of notes:
The .380 loads are from when ammo- especially for .380- was so hard to find, found a bag of the Montana Gold bullets to try. Yeah, they've been sitting around a while.

I've got some .30-caliber 90-grain Hornady softpoints for the 7.62x25, but ran out of jugs.
I also wonder how this bullet would work in the Carbine?
Posted by Firehand at 13:13

You should get in touch with us next time you need to test loads. We have land...

A lot of years ago, one of the British magazines# did some target practice on a kevlar vest, I'm not sure what level it was, I'm guessing III as it stopped .357 and .44 mags.

What penetrated the most layers?

They put it down to the pointier nose shape.


#
Can't remember whether it was Guns Review or Handgunner, both long gone, Guns Review after being bought by a "conservative" politician (Heseltine) to silence it before a general election; who needs socialists when supposed conservatives do that?

My wish was that someone would make a carbine in this caliber. I've got a couple of "tuna cans" of the ammo just waiting...

There've been a few posts in the gunsmithing section of practical machinist forum about AR15 builds in 7.62 tok.

The recoil impulse for tok is about the same as 9mm p, so, if you can fit the greater front to back length of a tok mag into the mag well, the existing bolts in the closed bolt 9mm carbines that were all the rage in the 80s will work, you just need change the barrel add use a suitable tok mag.

There are threads around on filing the ridge out of the back of crappy STEN mags, so Tok will fit

The Finns certainly re - barreled captured Soviet PPSh and the like to 9mm P.

Apart from changing mag housing front to back length and angle, the Czechs converted their SMGs from 9 to 7.62.

Apart from the Tok's slightly better performance on well wrapped up targets, there's not a lot to choose between SMG loads of 9mm P and Tok out of a carbine, both are into the .30 carbine / .32-20 league