I mentioned that Fiocci shotgun ammo the other day, (updated)

and picked up a box for testing.  Box looks like this, 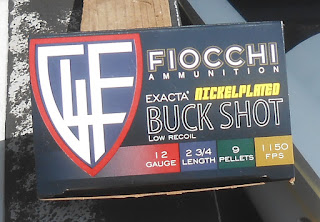 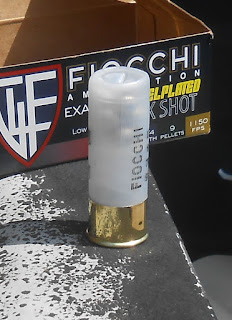 Now, if someone's going to bitch that this isn't a full, in-depth test, then convince someone to give me a few boxes of this and something to compare it to and I'll do it.  Till then, this is what you get.
Also, no bitching about photography; Oleg Volk I ain't.

Ran down to H&H to try this stuff, taking it and a box of Winchester Ranger low recoil 00 buck to compare it to.  Both are labeled 'low recoil', and I've found the Winchester to be definitely lower than standard buckshot.  Winchester says theirs runs 1145fps; the Fiocci is labeled 1150, so you'd expect them to feel about the same.  And they did.
Added: this was with a pump shotgun with an 18" barrel, no choke. Top two targets are Winchester, lower Fiocci, and the big holes are from wads.  Pattern sizes are pretty close. 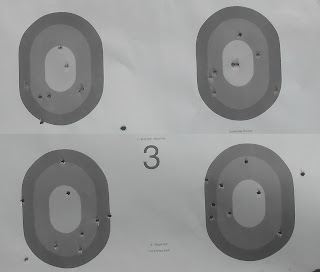 gave the same results.  As noted, recoil felt the same, and within the vagaries of me shooting this offhand had the same POA/POI.

Other observations:
They sounded different, the Fiocci having what I'd describe as a sharper report.
Fiocci definitely had more muzzle flash.  Nothing horrible, but noticeable.

Neither gives patterns like Federal Flitecontrol, so if you need that, get Federal.  If you want something that'll work just fine at down the hall or across the room distances, the Fiocci or Winchester should work just fine.  And the Fiocci comes in a box of ten for $5-7 depending on where you get it; that makes practice more affordable.

Thus ends this review.
Update: from comments,
If you ever see any, try the Herters loads sometime. I keep the Mrs' HD 12-ga stoked with their mini-buckshot shells. Fit six instead of five in a Mossberg 500 and while they are only 6-pellet they are 1200 fps and in the living room I think they will be just fine for a smaller-statured shooter. She says they are less recoil even than the Winchester 8-pellet reduced-recoil Ranger I keep in the bedroom gun.
I haven't seen this ammo, so I can't comment on it; from this I think I need to find a box to try.

Also, if you haven't heard of them, Aguila makes some mini shotshells, both buckshot and slugs.  I've tried them, they're  low recoil.  Please note the warnings at the bottom of the Midway page: many(probably most) repeating shotguns will not feed these reliably without modifications, and they cannot be relied on to cycle the action of a semi-auto.

A buddy ordered a pallet of Fiocci trap loads a couple years back. Stuff stunk so bad nobody would shoot with him him -- everything was fine until the shooting positions rotated and he was upwind...

...so, buckload patterning and performance look good, but how was the aroma?

Pretty much standard 'gunsmoke in the bay' that I could tell

This duplicates what I got a few years ago. Girlfriend definitely prefers low recoil as do I as I have aged. I bought so much of it when I ran into a case lot deal don't think I'll ever need to buy anymore. It is fine for inside the house distances.

I discovered Fiocchi Exacta nickel-plated 00 buck a few years back when a local gun shop got a case of it as a promo and sold the boxes off for about $6 each for 10 rounds. I bought ten boxes of it and shot a few dozen rounds through Mossberg cylinder-choked 18" barrels and found, like you, that they patterned just as good as the Winchesters I was used to paying twice as much for. Now I keep it in several shotguns as defensive/hunting ammo.
At across-the-garage distances it delivers just what is expected.

If you ever see any, try the Herters loads sometime. I keep the Mrs' HD 12-ga stoked with their mini-buckshot shells. Fit six instead of five in a Mossberg 500 and while they are only 6-pellet they are 1200 fps and in the living room I think they will be just fine for a smaller-statured shooter. She says they are less recoil even than the Winchester 8-pellet reduced-recoil Ranger I keep in the bedroom gun.

Ordered up 10 boxes. Going to try it in the Serbu shorty(3 shot 8" barrel.

Let us know how it works for you