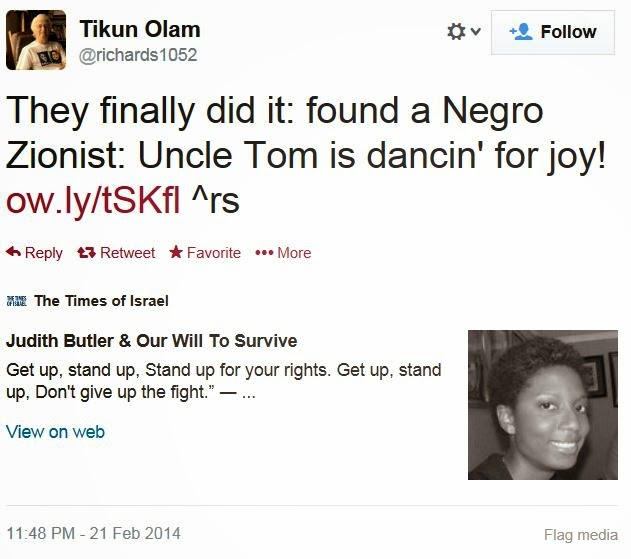 "How dare someone of color support Israel!"  Etc.  'Dirtbags' doesn't really cover it.


A lesson for our media.  Though I doubt a lot of them are smart enough or honest enough to learn from it.
...I came here today only because I found out that this is a live broadcast. I want to say that I also despise Inter because for three months it deceived viewers and spread enmity among citizens of this country. And now you are calling for peace and unity. Yes, you have the right to try to clear your conscience, but I think you should run this program on your knees.
...
Reporter Halya Coynash points to the Yanukovych regime’s record of media control and censorship: “It proved unnervingly easy within a matter of months of Yanukovych’s [2010] election to remove most critical analysis, negative reports about those in power, and inconvenient information from television.” Whatever new government is formed, that sorry record must not be repeated in a new Ukraine.
Note that she only went on the show because it was live; and she knew that under the circumstances they wouldn't cut her off or stop the broadcast.  She knew the enemy.

Which reminds me of the stories of 60 Minutes not allowing people to make their own recording of the interviews on the show, after they got caught screwing with what someone said and he had the proof.  Which to me would make it MANDATORY to make your own record.


Speaking of dirtbags,
Defense Secretary Chuck Hagel will reportedly propose a Pentagon budget that will shrink the U.S. Army to its smallest number since 1940 and eliminate an entire class of Air Force attack jets.
If he gets this, God knows the price the troops will pay.  Remember the pics of pre-WWII troops training with a pipe as a pretend mortar and wood rifles?  Sonsabitches will have us back to that.


We're supposed to trust the IRS and the politicians defending it why, again?
On March 9, 2010, around 10 a.m., I announced my plans to run for senate representing Delaware.

Later that same day, my office received a call from a reporter asking about my taxes.
It’s since come out, after a halting and unenthusiastic investigation, that a Delaware Department of Revenue employee named David Smith accessed my records that day at approximately 2 p.m. — out of curiosity, he says.

That these records ended up in the hands of the press is just a coincidence, the IRS claims.

To add insult to injury, the tax records given to the reporters weren’t even accurate. I had never fallen behind on my taxes, and a supposed tax lien was on a house I no longer owned.

The lien was highly publicized and used as political ammunition by my political opponents. The IRS later withdrew the lien and blamed it on a computer glitch but, at that point, the damage — and the invasion of my privacy — was done.
Last I heard it's an actual violation of law for someone to do what Smith did; let alone such information being slipped to the media.
Who's in jail?
Who's even been charged?
Same as Gunwalker: coverup, lie, 'Please go away and stop causing us problems', and corrupt politicians working to prevent anything being done.
Posted by Firehand at 07:01