Have some friends who run a perambulating bookstore, mostly working Renaissance fairs and celtic festivals and such. One of his early spots was a booth at Scarborough Faire south of Dallas. A few times, when work allowed, I'd go down for a weekend and lend a hand, which also got me a chance to wander around the fair. 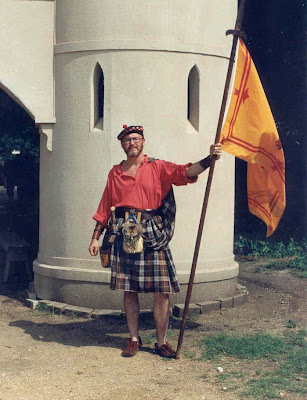 Memorial Day weekend. I'd taken two shirts, figuring I could rinse one out Sunday evening and have it to wear Monday. Slight problem: I hadn't taken into account the fact that not only was it June in central Texas, but the humidity was bloody awful; come Monday morning that shirt wasn't just still 'damp', it was so wet you could almost wring water out of it. Brian's helpful suggestion: "Skip the shirt, nobody'll care." So I did.

I did pass on his suggestion that I go to the face painter and have her do some knotwork on my chest and back, and good thing, because I'd have had that design light among the tan for the rest of the year.

Anyway, I'm taking a break from the shop and wandering around, and happen by the Pecan Grove just as the daily parade is starting(referred to by the players company as the Death March in such weather). I knew a bunch of people, several said "Come march with us!" No, thank you, I'll just wander a bit under the nice shady trees. Until, just as they reached the first turn, the Queen of Scotland comes running up looking frantic. She spots me. "Oh, M, can you help me?"
"Certainly!" Hey, she's the queen. Yes, I should have said 'No'.
"My page is missing, can you carry my parasol in the parade?"

So, somewhere out there are pictures of the Scottish Court in all its glory, and right behind the Queen is a shirtless, hairy-chested, kilted guy holding the Queen's tiny parasol to shade Her Highness from the sun. 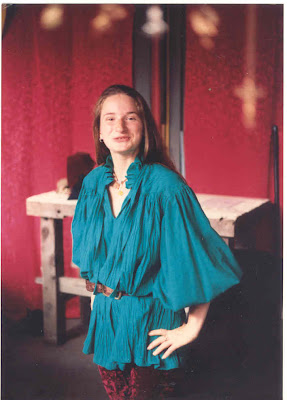 No, this isn't the Queen, I just like the shot. Maria, you are a lovely thing.
Posted by Firehand at 12:00