Daughter just sent me this:
Ant B is an artist on Etsy who is also a member of April’s Army. This is a story she posted in the Regretsy forums a few days ago.

I was heading out to the backyard this morning, when I saw the neighbor that lives in the house behind ours in my yard. He was putting leaves from one of my plants in a shopping bag. I yelled, “Hey!” and he grabbed another plant and stripped it up, taking all the leaves off. By the time I got outside, he had done two more plants and shoved all the leaves into his bag. By the time I got halfway to him, he ran off, carrying the bag.

I inspected the damage. He had stripped or broken off all my okra plants. They hadn’t started producing yet.

I think he thought they were ….not okra. 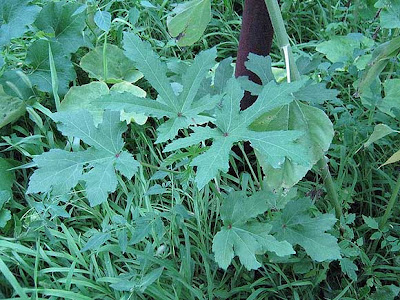 An undercover cop just stopped by. He took my report. He was going to tell the neighbor to stay off my property but no one answered the door. He said that there was no proof he took the leaves, and that there was no value to them so there was no way to charge him. But we both had a good laugh over it, and he took photos and said he was sure his fellow officers would laugh too.

Just got a knock on the door. A police office stopped by to let me know that my neighbor was arrested trying to trade a baggie of chopped green leaves for a case of beer at a liquor store a few blocks away. According to the store owner, the guy told him the leaves are high-quality home grown marijuana, and when he was arrested, he claimed he stole them from my garden, where I had them hidden in a flower bed.

The police officer that came by was a different one than from earlier, but had already heard the story about the okra thief. He went out with a flashlight, looked at the okra, took more pictures, laughed a lot.

He asked if he could have some okra leaves to take with him, and a tomato from the garden for his dinner. I complied with the police officer’s request.

Too bad he didn't try to smoke them.

Bob, that was my first thought; that the cop would come back with "Well, your neighbor is in the hospital with some kind of poisoning..."

I'm not sure what's worse; not knowing pot from okra, or not knowing that it's the buds that get you high, and that leaf is trash.

(Back when I was a kid, we knew enough about our drugs to know which part you smoked, at least...)

This is a funny story. For a less humorous ending, google Japanese Maple mistaken for Marijuana.

Windy, I remember John Lott and Jeff at Alphecca posting about that. did the charges stick on the home ownwer and if they did, is he still inside?