Theo points to, among other things, a post at Sipsey Street

One of my nightmares in this whole pile of crap is the Line: nobody wants to go to the violence level, even breaking windows, unless that's actually what it'll take, but what if you wait too long and it's too late for some shattered glass to get the message across?

We've got people in high positions in the the government openly planning- hell, carrying out- the violation of their oath of office, openly breaking the highest Law of the Land; we've hit the point of asking "Is there ANYTHING short of a violent act- like breaking their windows- that they'll actually pay attention to?"

The other side? Some of these bastards would actually welcome it, because they could play 'Horrified Victim Of Extremist Violence', and our sorry excuses for reporters in the major media would play it up("Screw honest reporting, we have an agenda to push!"). Nancy Pelosi actually went on video talking about 'praying* to Saint John for help passing this law', you think she'd have a problem playing victim and martyr? As Oleg Volk says in his comment at Sipsey,
Seems like a bad idea to me. The legal proceedings would tie up our own resources, time and attention. It would look like plain hooliganism and the political message would get lost in the noise of the media coverage. Doing a light injury to the enemy and then standing to receive the return volley seems unwise to me.

We've got bastards of whom this isn't even a cartoon, 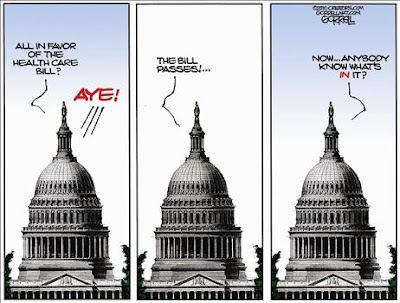 it's reality; any wonder a lot of people are at the point of deciding to break things, just in the hope of making these clowns pay attention?

I gotta' go with Oleg on this one.   These days a near 50% of the country would watch the resultant slaughter of the _window_breaker's_ and not even bat an eye!
.
As the faded dual bumper stickers on the rear of my pickup profess: We're Screwed 08

The point is not to break windows. It is to stop folks from rushing into treason and crossing the rubicon, without doing everything you can to warn them. Not everyone could or should want to break windows, or do anything except sleep comfortably in a warm bed. The point of any spear is always a difficult place. The vast majority of any people will only be capable of supporting roles. Look at any pyramid - Lots and lots of REMFs are needed, and are vital to any cause!

We are to blame.