In the 'Disney Syndrome Takes Another Victim' category, we have two

both from Tam. First, on the jumpy side, a jogger gets his bell rung by a kangaroo.
Mr Striegl was knocked unconscious and remembers little about the attack...
Yeah, unconsciousness kind of messes with your memory of the event.

Second, on the toothy side,
Wolves in Alaska are suspected of killing a teacher in an isolated village while she was out jogging.

An autopsy has revealed that Candice Berner, 32, died of injuries sustained in an animal attack, officials said.

Her body was dragged off a rural road, leaving a bloody track, into the nearby bush and was surrounded by wolf tracks.
To borrow Tam's words, "What I want to know is how come the same person who would never walk alone through a dark alley in New York City will go and "experience" the wilderness by themselves without so much as a dull butter knife to their name. I've got news for you, hippie: If you live in the backwoods of Alaska, once you step out your front door, you are no longer the top link on the food chain."
Guy I used to know was in the Air Force for 23 years, and spent two at a base somewhere the hell out in Alaska. At that time he said in winter there were two big rules: going outside the fence alone was a court-martial offense(you could die from a broken ankle before they could find you), and NO group went outside the fence without at least one member being armed: the top of the food chain in the area was big, hairy and considered anything it could catch as food. And the people who ran the base didn't have any Disney-fied illusions about it.

As to the belief "If I'm not threatening, the animals won't bother me", Peter Capstick once wrote that upon being told by a hunter that "I don't believe in curses", one of the locals who'd warned him about a local witch doctor informed him that he didn't have to believe in it for the curse to work; doesn't matter how much you believe in the sweet furry friendly animals if one decides you look tasty or he just doesn't like the way you part your hair.

Added: just because someone left it at Og's place: 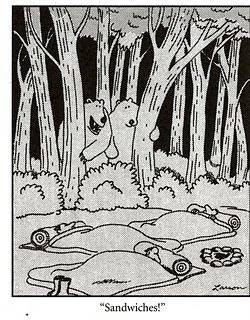 "If I'm not threatening, the animals won't bother me"

As they say - well that's your problem right there.

That shows a rather naive vision of nature.

As if the bunny is worried about appearing threatening to the wolf.

This unfortunate foolish woman died from what I call "Gentle Ben Syndrome" from the TV show of that name. The bullshit premise of the show was that since the protagonist meant the animals, especially alpha carnivores, no harm, they somehow knew it, and would be all buddy-buddy allowing him to treat injuries, eat from the same dish, sleep on the same bed, yada, yada, yada.

I was a Scoutmaster for many years and right to the end had to fight to overcome that idiocy, pointing out that ham sandwiches and donuts mean us no harm, and we know it, but we're going to eat the damn things anyway and that in a bear-human interchange, WE are that tasty ham sammich or scrumptious jelly donut. Especially children, who are smaller, weaker, slower, also much juicier, tenderer and more flavorful. More importantly, they are orders of magnitude easier to kill.

Another politically incorrect one that really starts fights is that bears are more likely to attack a woman during her menses. You'd have thought I was Ted Bundy's disciple for pointing that out and asking before allowing females on hikes in bear country. I refused to lead any group which included women having their periods. You should have heard the names I was called. A couple of years after I quit, one group was chased out of the woods by an aggressive black bear. The female Scoutmaster was having her period. Ham Sammichette, meet Gentle Ben.

A similar but less lethal interaction is between heavily perfumed humans, mostly city girls or metrosexuals and yellow jackets or bees. That interaction can be hilarious. (I use scentless soap and don't shave for a week before an outing.) All my outdoor clothing is laundered in scentless, non UV enhancing detergent as well.

If you bother to read the excerpts from her journal printed in the Daily News you'd find that "Disney syndrome" didn't apply to the young lady in Alaska. She made a mistake but it wasn't utterly irrational.

But enjoy the smug.


WV: inanes - (the), what some people aquire when they would rather make assumptions than look at the facts

Firehand said...
This comment has been removed by the author.
6:03 PM

Matthew, there's no smug involved; there's reality. She went out running without means of defense in a place where there were known to be aggressive predators active, and paid the price.

No, hadn't read any other stories about it at this point, and it wouldn't change the fact.