Another example of the tolerance and caring of the left 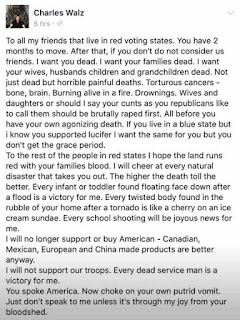 another from the article 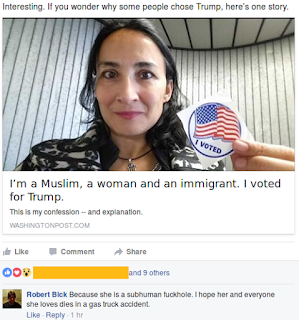 
Safety pins.  I'm taking this as 'If your diaper is falling off, I will save you'.
From the comments: 'Do people on the left think Trump is really going to make Muslim people register because it was their hero, FDR, who actually did inter people?'


Oh, boy, this is gonna make heads explode:
Donald Trump has selected one of the best-known climate skeptics to lead his U.S. EPA transition team, according to two sources close to the campaign.
...
Ebell is a well-known and polarizing figure in the energy and environment realm. His participation in the EPA transition signals that the Trump team is looking to drastically reshape the climate policies the agency has pursued under the Obama administration. Ebell’s role is likely to infuriate environmentalists and Democrats but buoy critics of Obama’s climate rules.

Ebell, who was dubbed an “elegant nerd” and a “policy wonk” by Vanity Fair, is known for his prolific writings that question what he calls climate change “alarmism.” He appears frequently in the media and before Congress. He’s also chairman of the Cooler Heads Coalition, a group of nonprofits that “question global warming alarmism and oppose energy-rationing policies.”


Mike Rowe thoughts on the election.
But here’s the thing – Dirty Jobs didn’t resonate because the host was incredibly charming. It wasn’t a hit because it was gross, or irreverent, or funny, or silly, or smart, or terribly clever. Dirty Jobs succeeded because it was authentic. It spoke directly and candidly to a big chunk of the country that non-fiction networks had been completely ignoring. In a very simple way, Dirty Jobs said “Hey – we can see you,” to millions of regular people who had started to feel invisible. Ultimately, that’s why Dirty Jobs ran for eight seasons. And today, that’s also why Donald Trump is the President of the United States.
And this:
Like those 3 million “shovel ready” jobs we heard so much about eight years ago, the kind of recovery that Donald Trump is promising will require a workforce that’s properly trained and sufficiently enthused about the opportunities at hand. At the moment, we do not have that work force in place. What we do have, are tens of millions of capable people who have simply stopped looking for work, and millions of available jobs that no one aspires to do. That’s the skills gap, and it’s gotta close. If mikeroweWORKS can help, we’re standing by.

If Trump's smart, he'll get Rowe involved in the 'get people to train for the jobs begging for people' work.

Labels: Globular Warmering Bullcrap, Progressive dirtbags, The Way It Should Be Done