The Senate delivered a devastating blow to President Obama’s agenda to regulate guns Wednesday by defeating a bipartisan proposal to expand background checks.
It failed by a vote of 54 to 46, with 5 Democrats voting against it. Only 4 Republicans supported it.
Who're the RINOs?
GOP Sens. John McCain (Ariz.), Susan Collins (Maine), Pat Toomey (Pa.) and Mark Kirk (Ill.) voted yes.

And Manchin is all upset:
Manchin also criticized the NRA, who had given him an A rating, for distorting the substance of his amendment.

“I was surprised when the latest alerts from the NRA was filled with so much misinformation about the firearms background check legislation,” he said.

“I don’t know how to put the words any plainer than this: that is a lie,” he said.

Manchin and Toomey are likely to see their NRA rating downgraded as a result of leading the charge to expand background checks. 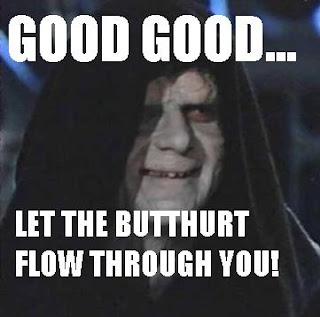 Translation: "How dare they!  I'm Senator MANCHIN, and they were supposed to do what I wanted!?"

Added: ran across this from Obama throwing his fit: 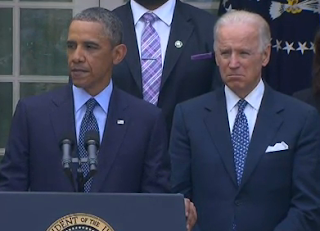 He looks pissed, and Sheriff Joe looks like Walter after someone put a habanero on the end of the stick up his ass.

From SNBQ earlier:
The Democrats have pulled the amendment that would restore gun rights non-violent felons, so CCRBKA has pulled their support for Toomey-Manchin. They never should have done this in the first place. You don’t give up something concrete for a promise.
And on the vote itself:
4:12PM: Voting is proceeding. Lautenberg is on the floor and voted. He was not expected to return to the Senate.
4:27PM: Manchin-Toomey goes down 54-46. It failed to achieve cloture.
4:29PM: The Grassley-Cruz-Graham substitute is up for a vote.
4:45PM: The Grassley-Cruz-Graham substitute fails 52-48.
4:46PM: The Leahy-Collins amendment is up for a vote. Cruz asks people to vote against, because it could ensnare honest citizens. This is the trafficking bill.
5:00PM: The Leahy-Collins Amendment fails 58-42.
5:03PM: Here we go with the National Concealed Carry Reciprocity Amendment.
5:04PM: Cornyn’s is speaking on behalf of his amendment, noting that it would be like a drivers’ license.
5:04PM: Schumer notes that every single police officer in America will tell you concealed carry would be a disaster. Really? He notes it’ll be mass chaos. Dogs and cats living together! It’s offensive to the New York way of life. Schumer should realize the Bill of Rights is a “way of life” for all Americans.

The fight ain't over, but this IS a defeat for the gun bigots and hoplophobes.

GALLUP: Only 4% of Americans Think Gun Control Important Problem...
Posted by Firehand at 15:10

Is Manchin a lawyer? If he is, he should get THREE corners of his lawyer card clipped for this masterpiece of legislating through what was NOT said.

Yeah, this is a good step, but just a step; we have to keep after the congresscritters.

Manchin's bio I just looked over doesn't say; does show he's a lifetime politician, which is- well, you know.