This guy thinks the gun bigots and hoplophobes are playing chess, of a sort

Insty had a link to a post on how and why many of the gunbigots and hoplophobes think. Couple of excerpts, with my comments thrown in:
...The problem is this view assumes people are foolishly naive. I know some of these people and they are no fools. So we must credit that their calculation is rational and thus a bit more complicated and less transparent. The alternative assessment is that the intelligent and fully rational hopolophobe is deeply disappointed with modern American gun culture and committed to an agenda of profound change.
Whether it's because they simply think that nobody except .gov minions should be allowed access to arms, or believes that firearms are so dangerous that no private citizen should have them doesn't really matter here; the factor we have to worry about is the 'no private citizen should be allowed to own arms'.
He realizes that nothing currently on the table pushes supply controls far enough to have any measurable impact on mass shooting or ordinary gun crime. He also appreciates that things can change. This must be his hope. So what kind of regulatory agenda would it take to satisfy someone whose private security calculation is to abhor guns and hope that no one else (except government) has them either?

The answer was evident a generation ago when Howard Metzenbaum acknowledged the basic reality about gun bans, unless you ban all of them, you might as well ban none of them. And that simple statement of the basic demands of supply control theory is at the heart of the objections to universal background checks.  This may seem like a big leap, but it is really just a few simple steps.
Which brings us to their basic desire: ban the private ownership of firearms. All of them.  Which we know from their words(some of them found here, more here) and actions.  They- most of them- lie about it to the general public, but in friendly audiences they speak it plainly; happily, thanks to this here interwebs, it's easy to find their words and put them up for everyone to see(another note on this later).
And registration is a required step:
So it turns out that the inventory of unrecorded, “no paper” guns, is a far stronger barrier against sweeping gun bans than any pronouncement of the Supreme Court or other such parchment limits. It is in fact a hard practical block that renders gun confiscation in America a pipe dream.  But this barrier is not insurmountable.
If you actually knew where the guns were, managed to get sweeping bans through congress, and got a slightly differently configured Supreme Court to nod yes, gun confiscation goes from impossible to at least plausible. And while that scenario seems unlikely today, not so long ago, it was the openly articulated agenda of many of the people and organizations in the vanguard of the current battle.  And that helps explain the “bewildering” opposition to universal background checks.
Yeah: we know what they want, and are determined not to let them have it.  So they throw out bogus '90% of the people want this!' polls, and use emotional blackmail. And surround themselves with children 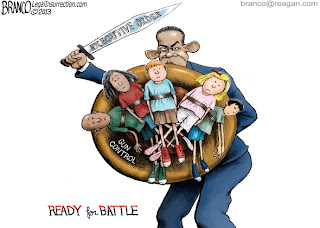 while demanding 'something be done'.  Doesn't matter that even Feinstein admits the universal background check law they want now wouldn't have stopped Sandy Hook or other multiple-murders(and how dare you bring that up, don't you care about the VICTIMS?), they want it.  And we know why.

Which is why, when Coburn offered support for UBC if no records were kept, Schumer  turned him down: the ultimate aim of this was to have those records.  Those lists of who owns what.

Mandatory checks on all secondary sales, supplemented by some type of data recording (either open or surreptitious) means that within the life span of those alive today, the inventory of “no paper guns” (which again forms the hard practical barrier against sweeping gun confiscation in America) would evaporate.  So the objection to universal background checks, which in isolation many find unobjectionable, is really rooted in a fear of gun registration. And the objection to registration is really an objection to the grand ambition of sweeping supply controls.
Short version: The simple fact of not knowing what you own, or who owns what, is a serious impediment to their desires.  And it really pisses them off.  "How dare you own such a thing without being on our list?"  Etc.

Which does bring up an idea: "Owning firearms that are not on any list is helping protect the 2nd Amendment!"  Tempted to throw that out on the book of face and see how many heads explode.

And it's that 'surreptitious' that scares hell out of people.  The rule in Manchin-Toomey saying 'It's illegal to make a registration list' is seen as bullshit because the EffingBI and ATF have already violated law in that regard, and nothing has been done.  Violating international borders and perjury and lying to Congress are illegal, too; how many people in Fast & Furious have been charged with those, let along prosecuted?  So we're supposed to trust them?


And that's what this really boils down to: trust.  We don't trust the clowns demanding these laws NOT to abuse them, not to try to register and later confiscate.  With good reason.  So when they demand we trust them, we say something rude, followed by "Hell NO!"  Sometimes phrased less politely.

The possibilities for fun there are endless.

There are also interesting catch 22 implications those fools, who, like me, are already on lists can have fun with.

While my ticket is valid, that chubby line of boys and girls in blue, know who I am, where I am, what I look like and what I've got.

Let's say I choose to sell or "surrender" my guns and hand my ticket back:

have I lost my interest in guns and shooting? or am I instead going into stealth mode?

There would be more of them than there are of me on such a raid.

such a move would hardly endear either them or the "law" they purport to "enforce", to me.

Hell, If they didn't "accidentally" deep six me in the process, why wouldn't I seek to slip into stealth mode, and aim to misbehave?

and if they did deep six me? well, I'd better make arrangements now, to have the word circulated in such an event.

They can keep playing chess. We're playing checkers. While they keep flitting across the board, we keep jumping them.