And for some of today's crap, the gun bigots are exiting the closet

and telling the truth:
On Friday night’s Rachel Maddow Show, Representative Luis Gutiérrez (D-IL) told guest host Melissa Harris-Perry that the violence in his Chicago district could be cause for lawmakers to take action not only on semi-automatic weapons, but on handguns. Noting (correctly) that nearly 97 percent of Chicago gun murders in 2011 were carried out with handguns, Gutiérrez said,


”It’s clear that we need to look at handguns also.”

Somebody tell that idiot Piers Morgan that the secret is out.  Also note that Chicago BANNED HANDGUNS years back, which was about the time the place really started down the drain; now the bastards are acting like that didn't happen and "We need to do something!"


So, are they actually surprised that this clown uses sock puppets?  Really?


Hey, stop bitching, peasant: King Bloomberg and NYEffing City need more of your money.  So pay up, and no whining about your house being destroyed.


Another case of "But this is OBAMA doing it, so we're fine with it.  Bodies and all." 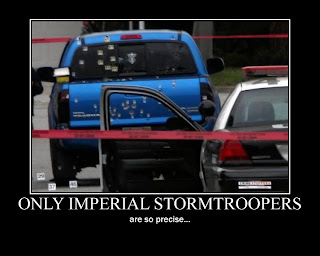 Back to Chicago, IL, I think this counts as "Stop telling the truth!"

Despite having some of the toughest gun laws in the nation, Chicago Police Superintendent Garry McCarthy says the Windy City “does not have strict gun laws.”

“One of the things that I would like to again try to clear up, and I ask you to please stop adopting the rhetoric of the gun advocates,” McCarthy said, addressing the press.

“We are at a state in Canada where they don’t want you using firearms for anything. Ever,” Lilley said. “That’s the push. And as we look at what’s happening in the United States, that’s what’s happening.”

He went on: “So I’ve got a warning to my American friends: Registration will lead to confiscation. And if you don’t believe me, just look at what’s happened here.”