So Occupy Oakland is in favor of child molestation;

how else would you interpret this insanity? 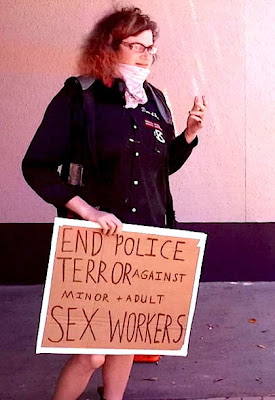 On Wednesday, June 13, members of the Occupy movement protested against a conference dedicated to combatting child sex trafficking — thus, the Occupiers in essence were coming out in favor of one of society’s most loathsome moral crimes.The protesters mostly were members of Occupy Oakland Patriarchy, a group within the overall Occupy movement tasked with overthrowing our civilization’s “patriarchy.”
Anyone who can call a child being raped on camera or sold as a whore a 'sex worker' is so freaking demented I cannot conceive how their mind works.
And I don't want to

The world is getting stranger by the day, and there are more things happening that I have to show control the occupy wallstreet and other leftist tools do not have to exercise. After a professor at a Los Angeles Law School called the riot an uprising I swore that I would deck the next person that called it that. It is the least I can do to repay those who died in the Warsaw Uprisings (the 1943 one where the Jews in the Ghetto decided it was better to die behind a pile of brass, and the 1944 one, where Stalin played a bit of realpolitik and let his postwar enemies (currently allies)get slaughtered across the Vistula while the Red Army waited).
Supporting child molesters like this.
RCOB time. I can say no more.