Two things: first, Richard Dreyfuss is, to put it politely,

a fucking idiot.
The opportunity arose when we both finished interviews on radio row. I approached Dreyfuss, put out my hand, and said “Hi, I am David Bossie, President of Citizens United.” Dreyfuss’ eyes lit up like he just saw Jaws and he said, “You’re going to have a hard time getting into heaven if you believe in that sort of stuff.” I was taken aback and asked, “Why?” Dreyfuss then went on a diatribe equating the Citizens United v. FEC Supreme Court decision to the Khmer Rouge. He compared me to Pol Pot “stacking skulls” back at my office. He actually used his hands to seemingly act out the stacking of skulls. I replied by saying, “I thought you would have been supportive of my First Amendment Supreme Court case because you are in the business of supporting the First Amendment.” He did not have a clear response and looked like a frustrated, institution-bound Dr. Leo Marvin from his Oscar-worthy performance in What About Bob? For someone who was at CPAC to promote a civics and civility campaign, calling me one of the worst mass murderers in history strikes me as awfully hypocritical. But this is not the first time Dreyfuss has used extreme and offensive language to make a political point. He once compared former Vice President Dick Cheney to Adolf Hitler and agreed with comments that wished Cheney dead (though later apologized). 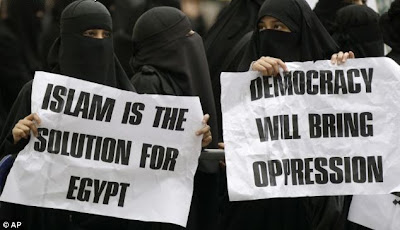 And you notice the signs are in English... not exactly for local consumption, I guess.
Posted by Firehand at 11:58