Ah, the kinder, gentler rhetoric of the left 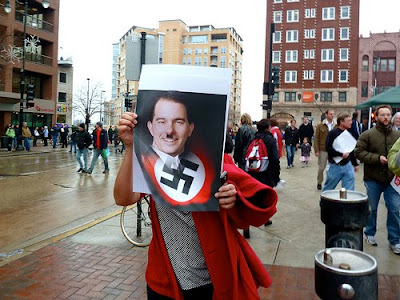 The Governor as Hitler. Uh huh. I asked the woman if she thought Scott Walker was like Hitler, and she said "Yes." So I said, "Are you saying that you think fascism could come to America," and she said, "It's what's happening."
Yeah. The Governor ...defended requiring government employees to contribute nearly 6 percent to their pension funds and nearly 13 percent to their health-care plans, saying that the pension contribution was equal to the national average, while the health-care contribution would be only half of the national average. and for that you morons compare him to Hitler? And call it fascism on the march?

And remember, these morons are teaching kids; any guesses what kind of history they teach?
Posted by Firehand at 18:59