From the past wonders of the Soviet Union 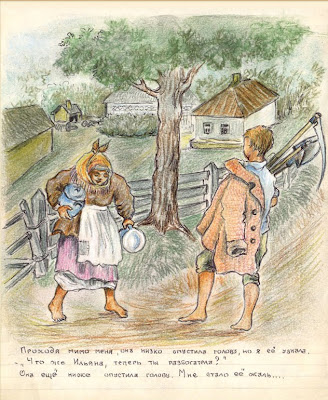 She passed me keeping her head down but I recognised her.>
"Well, Ilyana, have you got rich now?"
She dropped her eyes even lower. I was sorry for her...

From Mudville:
Euphrosinia (or Eufrosinia) Kersnovskaya didn't know it at that time, but she herself had embarked on a journey that would take her to exile and the Gulag. Over two decades would pass before she could tell her tale in words and pictures - and even then (1964) she would do so only in secret and at tremendous personal risk.

I discovered her work only after I'd completed (at least thought I'd completed)this little tale of the birth of the cold war, which I'd referred to from the beginning as a graphic novel, filled with elements from comic books, science fiction and movies, and concluded with a reference to fairy tales. When I found the web site devoted to her work I knew I wanted to weave a few of these stunning examples of the reality of life in the Soviet Union into the tale. When I read that she "envisioned the text and illustrations as an indivisible whole, a genre that perhaps lies somewhere between traditional Russian lubok engravings and the modern graphic novel" I had no doubt. One cannot consider the impact of the efforts of the many useful idiots of the West (in the Trinity example, atomic spies) without having a true picture of the world they supported and facilitated. Compared to the documentation of the evils of Nazi Germany, very few such first-hand accounts of the Soviet hell exist. (And once he had the atomic bomb at his disposal, no one was going to loosen Stalin's iron grip.)

Lots more drawings and captions here. Pass it along to anyone you know who defends/has starry eyes about the Soviet Union
Posted by Firehand at 06:47

There will be hordes of folks who will immediately begin making comparisons between her story and events occurring today. Sadly, I do not forsee many who will focus on the courage she must posses to be able to create such beauty after 20 years in the gulags.

The story she tells of what happened is important as history and as a warning, but the untold story of how one can survive and keep beauty alive needs also to be learned by all who fear the gulags. Could we know how to follow her we might even prevent the gulags in the first place.

Thanks for the link, I'm reading through it now.

This stuff needs to come out as a paper book.