Socialized medicine; a preview of the national version

Barbara Wagner has one wish - for more time.

"I'm not ready, I'm not ready to die," the Springfield woman said. "I've got things I'd still like to do."

Her doctor offered hope in the new chemotherapy drug Tarceva, but the Oregon Health Plan sent her a letter telling her the cancer treatment was not approved.

Instead, the letter said, the plan would pay for comfort care, including "physician aid in dying," better known as assisted suicide.
Of course, we're told that she's 'misinterpreting' what she was told:
Dr. Som Saha, chairman of the commission that sets policy for the Oregon Health Plan, said Wagner is making an "unfortunate interpretation" of the letter and that no one is telling her the health plan will only pay for her to die.
but
Saha said state health officials do not consider whether it is cheaper for someone in the health plan to die than live. However, he admitted they must consider the state's limited dollars when dealing with a case such as Wagner's.

"If we invest thousands and thousands of dollars in one person's days to weeks, we are taking away those dollars from someone," Saha said.
As I said: National Health Care, a preview.

Even for those with advanced cancer, new chemotherapy drugs can extend life.

Yet the Oregon Health Plan only offers coverage for chemo that cures cancer - not if it can prolong a patient's life.

"We are looking at today's ... 2008 treatment, but we're using 1993 standards," Fryefield said. "When the Oregon Health Plan was created, it was 15 years ago, and there were not all the chemotherapy drugs that there are today."
But, of course, if the FEDERAL government takes over your health care, it will always be perfectly up to speed and efficient... excuse me, I hear oinking and wing noises outside the windows. 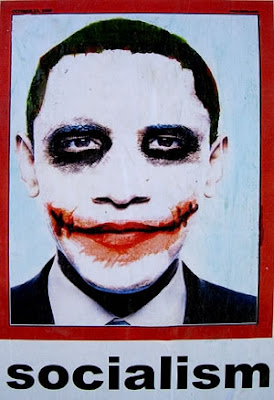 "Yet the Oregon Health Plan only offers coverage for chemo that cures cancer - not if it can prolong a patient's life."

Does anyone in the Oregon Health Plan actually get chemo therapy then? It is my understanding from dating a few doctors and conversations with the Dr. my mother worked for that there is enough variation in people you can't guarantee a cure for cancer, you can merely take your chances and give it your best shot.

I'd say Barbara Wagner's reading comprehension is 100%, compared to that of the Oregon Health Plan Administrators.

Damn, he's scarier without the make-up.

For a long time, the role of chemo has been to see if it will kill the cancer cells before it kills the rest of you; in no way is it near a guaranteed 'cure'. I watched the ex-wife go through it twice, and it sucks.

Apparently they have 'standards' of who they think is worth trying it on.

So much of modern medicine would have never gotten through that needle-eye from wild-eyed-experimental to accepted-for-most-people if the Socialists had taken over the gatehouse before now.

So, the general philosophy of socialism is as the girl said to Tom Hanks in "Every Time We Say Goodbye", "we can all be poor together", and specifically for medical care, we all can die of things that would have been curable, but at least we're only paying $1.00 per doctor visit (and incredible taxes).