I guess The Annointed One is getting a bit jumpy,

with all the subjects reading his socialized medicine bill, and actually reading or watching him saying what his actual plans are and borrowing from Gandalf when they talk to their elected representatives("YOU SHALL NOT PASS THIS!"); so he's trotted out the 'moral imperative' 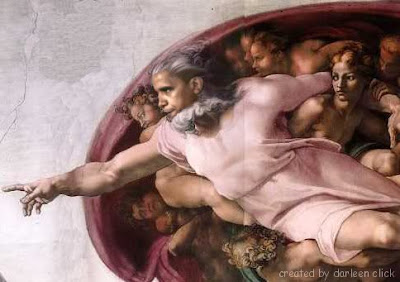 for the government to loot everybody who works in order to give socialized medicine(he pretends it's insurance, but hell, we know better) to 'everyone' as he defines it.

And it's getting HARD, dammit! It wasn't supposed to be HARD for The Annointed One Socialist to rul- uh, 'lead' us, yeah. It was supposed to be easy! But with this internet thing allowing people to catch- and prove- lies and distortions the state-approved media puts out, it's getting harder. And the Tea Party people don't have to go by the approved media putting out that they're a few nuts; they know better, and they're spreading; all the approved-media weenies calling them 'teabaggers' and such does is piss them off more.

I mean, what's a narcisstic semi-deity to do, when it appears his semi-divine presence and words don't make people do what they're told?
Posted by Firehand at 18:45

That picture is just wrong.