Range Day was had,

and it was good.  Oklahoma is doing the usual "It's spring!  HA, not!" thing; yesterday and today really nice, front coming in tonight.  But it did make for a nice day at the range, along with all the other people who had the same idea and could get loose.

Among the results, I think I've found my standard load for the .338 project rifle: 44.0 grains Varget under a 200-grain Hornady FTX bullet, in either a Federal or Lake City case; that load gives results like this at 100: 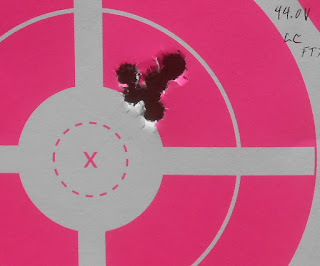 Considering that's with me pulling the trigger, I'm quite happy with the results.  Average velocity 2385fps.

Tried some more loads in that Sharps, including a couple of black-powder.  The owner picked up a Lee mold for a 500-grain bullet, and this was the result with 67.0 grains of 2f black with 2/10" compression 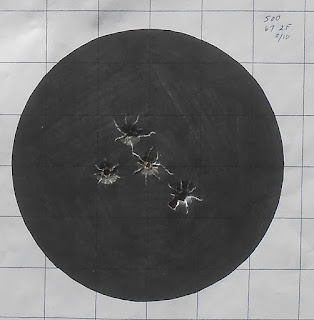 It's a five-shot group, either one got thrown way-the-hell somewhere, or two went through the same hole.  Velocity averaged 1189fps.

This one was with smokeless: same bullet over 26.5 grains Accurate 5744 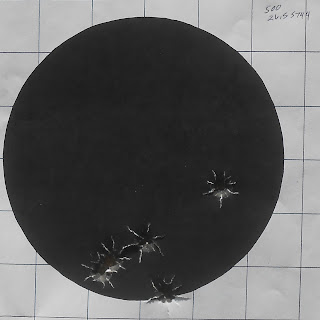 I'm calling that high-right as my fault.  Velocity average 1358fps.  So higher velocity without the fun of using a blow tube, or having to wipe the bore between groups.  The smokey stuff is fun, but I think I'd stick with smokeless for the most part.

I'll throw in, that rear shooting rest I made?  Works, quite well.  After another use or two I'll have to add some beans as these pack and split a bit.

For your rear bag, cut a small stuffed animal (like a beany baby) to pieces or go to a hobby shop and get plastic beads like these:
http://www.joann.com/plastic-stuffng-bead/1758416.html

No moisture pickup and no breaking down as it gets used.

That stuff would be perfect