Blew off laundry and such today and headed to the range, partly for practice, partly for fun, and partly to get the numbers I was going to get the last time, but couldn't because- surprise!- the battery in the Chrony was dead.

Primary this time was fire the same load in a 4" barrel .357 Mag revolver and in the 16"-barrel Model 92 clone.  Did this with two loads: first 125-grain X-Treme plated flatpoints over a charge of 2400 powder.  That worked out as follows for four in the rifle(chrony trouble) and five from the revolver:

Then moved to some Hornady FTX 140-grain bullets over AA#9 powder, and the Chrony worked as it should this time

The Hornady information shows this load giving 1550fps from a 16" barrel, so just a little below that.  It also shows this giving 1250fps from a 4" barrel revolver, again I got below that.  I really want to get a bunch of water jugs together and fire these into it, see how the bullet expands.


The other thing wanted to note, remember that I helped a guy put a load together for his AR15 in 7.62x39?  Would up settling on 22.0 grains H4198 over the X-Treme 123-grain plated bullet; functioned the action fully and reliably, the only problem being that occasionally that flat-nose bullet would catch on the front of the magazine instead of sliding over.  A pain, but not a big deal for a practice load.  Well, we were finally able to run some of those loads over the Chrony, too.  This time we got eight readings before the wind started gusting and causing problems:
1828
1878
1867
1831
1809
1862
1794
1843
Average velocity 1839.  That's a little higher than I expected, and higher than X-Treme recommends for those bullets.  He's had no problems with copper buildup or other nasties in the bore, and he says it consistently gives groups like this: 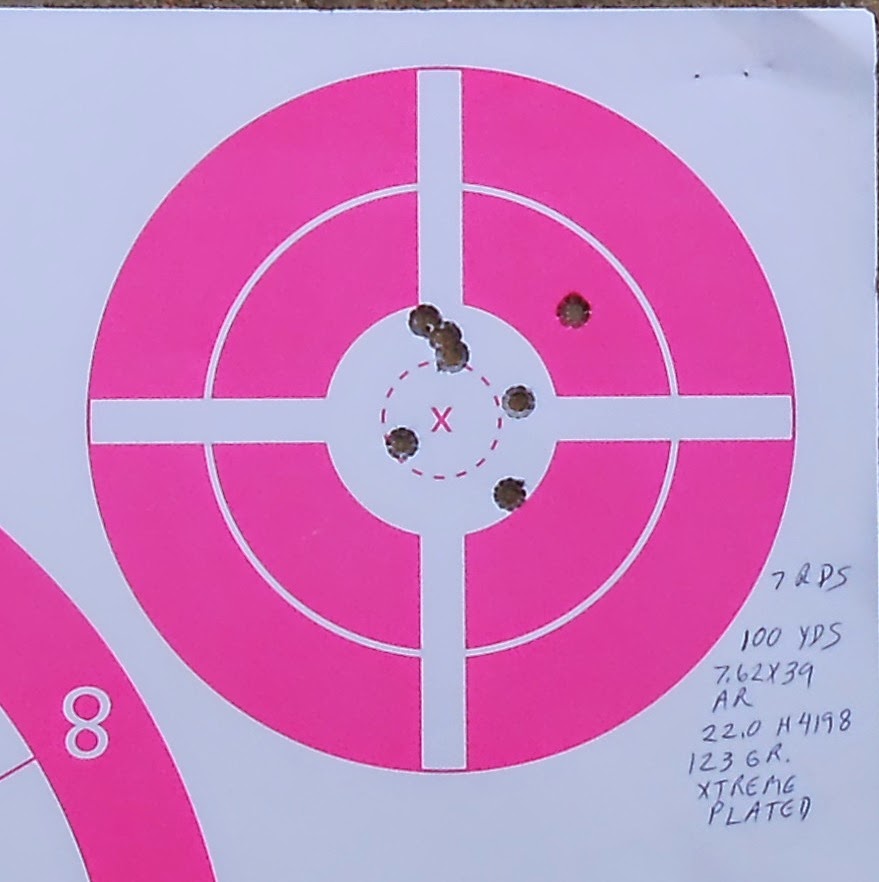 That's seven rounds at 100 yards, far better than I expected for a light practice load.  Considering these run $42.25 plus shipping for 500, let's say he's happy.
Posted by Firehand at 15:03