Translation: "Afraid of being seen sitting on his thumb while people died, again,

the President decided to Do Something."
Also, bullshit:
But interviews with multiple officials at the White House, the Pentagon, the State Department and other agencies paint a portrait of a president forced by the unexpectedly rapid deterioration of security in Iraq to abandon his longstanding reluctance to use military force.
He's been QUITE willing to use military force, when it suits whatever's going through his head.  Libya?  Syria?  In Libya he said he didn't need to be bothered with going to Congress; only reason he didn't try that in Syria was it was made clear it'd be his ass if he did.  Borrowing from Insty, He was quick to use it in Libya, and he was eager to use it in Syria until Putin outsmarted him. He is, perhaps, reluctant to use military force when it’s obviously in America’s interest, but that’s a different thing.

This will not come as a surprise to Reason regulars: More than 40 percent of the people on the United States federal government terrorism watch lists have no discernable connection to anyterrorist group.

280,000 out of 680,000 people on the list of those whom authorities are keeping their eyes on and pulling aside for further examination at airports and border crossings have no actual connection to terrorist groups. The analysis comes from journalists Jeremy Scahill and Ryan Devereaux at The Intercept. They just recently exposed the complicated yet also terribly vague guide the federal government uses to put people on the list. Now they've gotten their hands on a classified document detailing the National Counterterrorism Center's (NCTC) list of accomplishments for 2013 and have crunched the numbers to provide the lovely graph below: 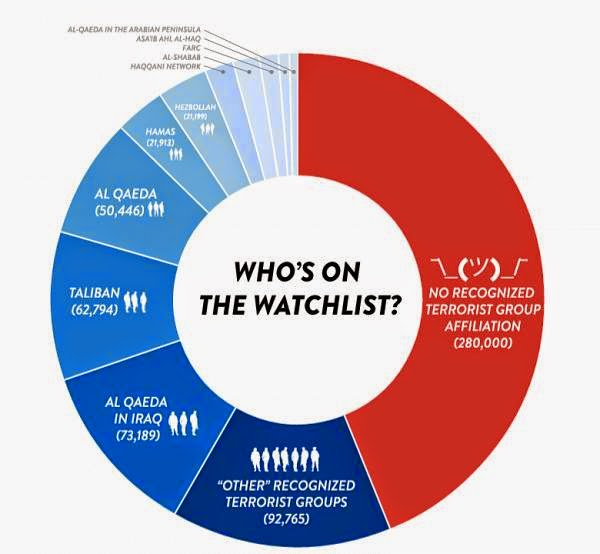 And while various politicians are playing "Let's get all these illegals in and register them as Democrats!", this is happening.
The Sheriff leading the investigation into the brutal slaying of a Border Control Agent by two illegal immigrants has revealed local farmers in his county have reported spotting gangs of armed Mexicans 'in military fatigues' marching through their fields.
That's along with all the other crap, of course.


This is pretty damn cool; small underwater drone designed to follow the tags on some Great White sharks.  Occasionally, one gets annoyed.  Or decides to see how it tastes.