Again, "It's the cover-up" only counts

if the media actually bothers to investigate and REPORT on it.
And we have the racial grievancemongers (aka Congressional Black Caucus) screaming 'RACISM!!!' at anyone who dares to criticize Rice; and the media reports every damn word of that crap, don't they?
Because that's far more important than a burned consulate and CIA office and a few dead Americans.

Speaking of which,
Forget questions of who ordered what and when it was ordered and what assets were available to assist those poor souls at Benghazi. Smucker, a known and very vocal supporter of Mr. Obama, just thinks that “shit happens.”

It doesn’t work that way with other Presidents, or for those with whom he disagrees.  For instance, he also went off on a diatribe against Mr. Bush for allowing UBL escape Tora Bora.  For Smucker, who wrote a book on the subject, UBL’s escape isn’t about shit happening.

But for the right President, people like Smucker and Kmiec are willing to throw their colleagues and good friends under the bus.  They are just so much collateral damage, and knew all about the risks associated with their job.

A point about dealing with gun bigots and control freaks:
Gun control at its root has always been about gun control.  Feinstein is a statist, and her laws and regulations will always and forever increase the power of the state. Feinstein sees through McArdle’s argument on cosmetics, which is why her proposed ban includes semi-automatic weapons. There isn’t anything cosmetic about the aims of the gun control advocates.


More of the 'what we're finding out is in the bill', and it sucks.
Remember Obama promised this as a free exam — no co-pay, no deductible, no charge. That’s fine and dandy if you are healthy and have no complaints. However, we are obligated by law to code specifically for the reason of the visit. An annual exam is one specific code; you can not mix this with another code, say, for rectal bleeding. This annual visit covers the exam and “discussion about the status of previously diagnosed stable conditions.” That’s the exact wording under that code — insurance will not cover any new ailment under that code.
If you are here for that annual exam, you will not be covered if you want to discuss any new ailment or unstable condition. I cannot bait and switch to another code — that’s illegal. We, the physicians, are audited all the time and can lose our license for insurance fraud.


Well, there's another actor who goes in the 'idiot part-player' category.


Why did Obama win the election? 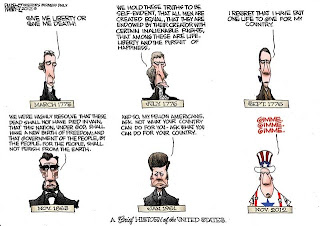 One more thing: it's been mentioned that Romney just didn't sell himself to a lot of conservatives and libertarians.  A week or so ago I had the radio on Rush' show, and a caller was someone who hadn't voted.  Said flatly that he knew that by not voting in his state it was essentially a vote for Obama, knew all the problems.  Asked why,(paraphrased),
"I saw Romney attack conservatives in the primaries with energy, but when it came to Obama he was measured and polite.  He made it plain who he actually sees as his opponents, and it's not Obama and those like him.  Add that to his record on a number of things, and I just could not vote for him."
I'd imagine that covers a LOT of people who didn't vote: given a choice between the socialist and the socialist-lite, they thought "Why bother?" and stayed home.
And the Stupid Party response?  "We need to be more like the socialists!"
Why yes, I DO despair.
Added: as Kevin notes,
In the Carboniferous Epoch we were promised abundance for all,
By robbing selected Peter to pay for collective Paul;
But, though we had plenty of money, there was nothing our money could buy,
And the Gods of the Copybook Headings said: "If you don't work you die."
Posted by Firehand at 07:35

"He made it plain who he actually sees as his opponents, and it's not Obama and those like him. [...] I'd imagine that covers a LOT of people who didn't vote: given a choice between the socialist and the socialist-lite, they thought "Why bother?" and stayed home."

And it's amazing how many "rank-and-file" Republicans still don't get this.

Too many people got so focused on "anyone but Obama" that they didn't pay attention to who that "anyone" really was. For the people who were paying attention, pointing it out was like talking to a brick wall. When the actual election came around that lack of attention to details bit us all on the arse.

I got it, then and now. I voted for Romney for two reasons:
I thought he'd be far less destructive to business and the economy, and
Far less a threat to the 2nd.
No illusions what kind of politician he is, I just thought the landing might be a little less harsh with him in the Oval Office.

Which was balanced by "With this soft leftist in the White House, what the hell are the RINOs and Democrats going to come up with that he'll sign on to?"

And the clowns in the Stupid Party will try to run someone even more-so next time, because "It's what we have to do" or some other such idiocy