You or I would be in jail, but Only Ones at ATF

may get fired, but All are expected to receive full retirement benefits.
Oh, of course.

Note that In addition to involvement in Operation Fast and Furious, the consequences for these officials come as a result of their handling of the Jay Dobyns' arson case.
And it all magically comes out after the election! Isn't that amazing?


From the Dutchman, whose site I haven't been to in a while,

Latest from Claire Wolfe: RATS!
DON'T LET A SNITCH WRECK YOUR LIFE!
Also, commenting on one of the RWPP gun bigots,
I've said it before and I'll repeat: these collectivist pukes are more race-obsessed than the Nazi Gauleiter of 1930's Lower Swabia. I've run into more than a few black folks in gun shops and one gun show since the election and they are there to BUY. These are not gang bangers, but middle class folks. Do you think they are motivated by the color of Obama's skin?
With suitable illustration, from Oleg: 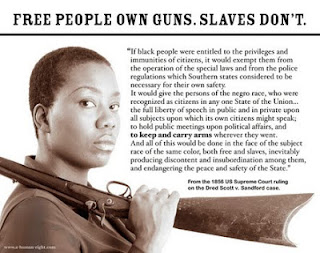 One more thing, this time his full post:
Congress adopted most of our recommendations. But this bill--as big as this bill is--still falls short, because we just could not get the Congress to carry out the requests we made of them. I asked for the national registration of all guns and the licensing of those who carry those guns. For the fact of life is that there are over 160 million guns in this country -- more firearms than families. If guns are to be kept out of the hands of the criminal, out of the hands of the insane, and out of the hands of the irresponsible, then we just must have licensing. If the criminal with a gun is to be tracked down quickly, then we must have registration in this country. -- Lyndon Johnson, remarks on the signing of the GCA 1968, 22 October 1968. 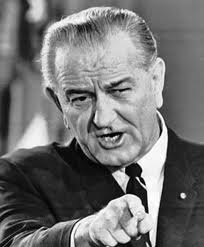 "I signed the Gun Control Act of 1968 so why aren't you peasants paying any attention to it?"

In my Sunday post "Give me that old time (gun control) religion," I highlighted this statement from the latest Congressional Research Service report on gun control legislation:

"Per capita, the civilian gun stock has roughly doubled since 1968, from one gun per every two persons to one gun per person."

"By . . . 2009, the estimated total number of firearms available to civilians in the United States had increased to approximately 310 million."

The official U.S. Census Bureau announced that the "2010 Census showed the resident population of the United States on April 1, 2010, was 308,745,538," so actually the number was slightly more than one firearm per person in 2009. What I neglected to give you, my readers, was the number of Americans in 1968 so that you would have a baseline to appreciate how firearms ownership has grown since the modern push for citizen disarmament began 45 years ago.

Well, here it is. In 1970, two years later, the Nineteenth United States Census determined the resident population of the United States to be 203,392,031. Thus, if we accept that the number of firearms at the time was one per every two persons that gives us something in the neighborhood of 101,000,000 in 1968.

So, by the CRS report's count, the frantic efforts of the gun banners have not only doubled the number of weapons per person, but they have more than tripled the aggregate number of firearms in the country.

The statement of Lyndon Johnson quoted above puts the number at 160 million, but this was provided him by the gun control lobby and although one guess may be as good as another (we will never know how many firearms were brought back from America's foreign wars in barracks bags and footlockers), it was criticized at the time as an overstatement. Even if we accept it as fact, that suspect statistic still reflects a doubling of the aggregate number of firearms in the country.

Personally, I think Johnson's number was inflated. Even so, give me some more of that old time gun control religion.

It's good enough for me.


From Californicated, a public official with some brains:
The city attorney of San Bernardino is under scrutiny for telling residents to “lock their doors and load their guns” during a city council meeting.
The official explained that because the city is bankrupt and slashing public safety budgets people will need to start protecting themselves.
City Attorney Jim Penman said he doesn’t regret what he said.
“You should say what you mean and mean what you say,” Penman said.
Some 'I wouldn't recommend' waffling, but stands by the comment.


On the other hand, to the San Jose PD, "Bite me, you morons."
Lady defends self and store against armed robbers:
In the meantime, the police are giving gun owners a piece of their mind. Albert Morales, the San Jose Police spokesman, said, "We don't recommend (drawing a gun or firing). We would have preferred that they just go ahead and comply with the request or demands of the robbers. Again they were after material items that could be replaced and again our biggest fear is that somebody would have gotten hurt, injured and possibly even died."

You know who else would have preferred that the jewelry store owner had just complied? The thieves. Who would’ve thought that cops and robbers would ever be able to agree on something?
Not mentioned by the SJPD was if she should have given them what the wanted if they'd decided to take her into a back room for some entertainment.  Or take her with them.  Probably "If you cooperate, maybe they won't hurt you, so don't pull that nasty gun, peasant!"
The problem is that when a statement like that comes from police, the subtle implication is that there’s something inherently immoral or illegal about using a gun in self-defense. It could give people the wrong impression about firearms -- whether that’s intentional or accidental is an entirely different debate.
Intentional, I'm sure.  The bastards.


And last, from Hofmann, on the CSGV liking to call people traitors and insurrectionists,
Setting that aside as just one more example of CSGV's utter (and wilfull?) failure to understand the Constitution and the rights it guarantees, let us move on to their contention that an "ideology" can be "treasonous"--that the mere adherence to a belief is enough to make one a "traitor." So, as we have asked before, who decides what ideologies are permissible, and which are "treasonous"?
Founding Father Tench Coxe once said:


As civil rulers, not having their duty to the people before them, may attempt to tyrannize, and as the military forces which must be occasionally raised to defend our country, might pervert their power to the injury of their fellow citizens, the people are confirmed by the article in their right to keep and bear their private arms."…"Who are the militia? Are they not ourselves? Is it feared, then, that we shall turn our arms each man gainst his own bosom. Congress have no power to disarm the militia. Their swords, and every other terrible implement of the soldier, are the birthright of an American....


CSGV calls such beliefs "perverted and treasonous."
Minutes later, CSGV left a comment responding to its own Facebook post, showing that they are aware of one aspect of how the Constitution deals with treason:


The Constitution also defines only one crime, the crime of Treason, which is punishable by death.


Yep--CSGV just admitted their sick belief that if you agree with Tench Coxe and other Founding Fathers, you are guilty of treason, and subject to execution.
How, exactly, does CSGV differ from a "hate group," and who, exactly, are the "traitors"?
Posted by Firehand at 15:36

The Rats book is good, well worth the hour it takes to read.

A kindly commenter left a link at Will Griggs place http://freedominourtime.blogspot.co.uk/2012/11/predators-with-impunity.html