the realization that 1980 was now 30 frikkin' years past,
which caused me to think of something: tech advances. Specifically, telecomm.
specifically...

In 1980 I was ending my first year at the agency I spent the next three decades at, all involved in law enforcement telecomm. When I'd walked in in 1979 I'd learned that keeping this information flowing both ways would involve a LOT of typing. To do EVERYTHING. Because we had one terminal(which epitomized ‘dumb’) that had a screen; yes, you could type out a message on it, but editing meant backspacing all the way to the error and retyping everything. And if you hit a certain character count it sent the message. Whether you wanted it to or not. And it generally sent it to ‘all stations’, which meant instead of you sending a question or response or something to one agency, EVERYBODY IN THE STATE WITH A TELETYPE GOT IT.

Take note of that word ‘teletype’. What we mostly had were ASR28 Teletype machines, which looked remarkably like this: 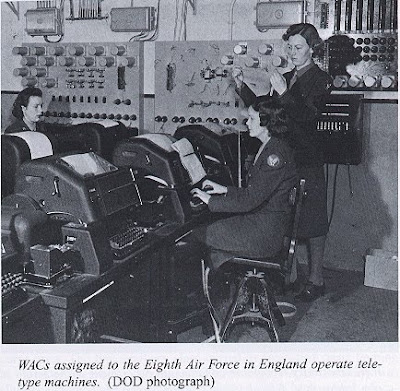 Here’s how you sent a message: there was a paper-punching device on one side of the machine, fed by a roll of (I think; it’s been a while)½” or 5/8” paper tape. You sat down at the keyboard,
Ran off a few inches of tape as a leader(purpose to come),
Typed out the address(Start Of Header character, address code, End of Header character), then a few line feeds(you’d better; you’ll see why),
Then typed out the text of the message.
At the end of the message you typed the ‘End of Message’ three-character sequence, then ran off a few inches of tape, and the message was done.

You see, as you were typing the punching machine was punching holes in the tape in a code for each character. Which means no way to edit other than starting over.

Now you tore off the tape, flipped up the cover on the reader, inserted the leader, locked the cover down and threw the ‘transmit’ switch. The reader started pulling the tape through and electrically reading the hole patterns and transmitting the message. On a long message that meant you had a LONG strip of tape and you had to make sure it didn’t get tangled or torn. If it was tangled and you couldn’t untangle before it would hit the reader you flipped the cover open, removed the tape and untangled, then started it again.

What if it tore? You had a few seconds, so if you were careful and fast, as soon as the tear reached the reader you could open the cover, carefully position the end of the tape and lock it back down; if you got it in place and did it fast enough, it would go ahead and send the message. If you didn’t or it wouldn’t accept you had to either
retype the whole damn thing OR
since the typewriter was typing the message as you sent it, figure out where the tear came and cut a new tape from that point on, with a few inches of leader so you could splice it in when the break hit the reader.

If you turned out to have an error in the address, you could cut a new header with some line feeds at the end and send it, then flip up the cover and insert the tape with the message in the line feeds between the original header and text(you DID leave some, didn’t you?) and lock the cover down so it could continue reading and sending; you got good at this after a while.

And it gets even BETTER!!!

Let’s take a message from, say, Texas asking for the drivers license status of someone. That came in on the NLETS machine(National Law Enforcement Telecommunications System) which, for some reason I never heard, used a different format and different width tape. So it typed out, you tore the message off and went to that oh-so-very-dumb terminal and ran the license(yeah, our only line of that type was to the computer that held DL records), then copied off the information and took it to the NLETS machine and cut the tape and transmitted it. Going the other way, someone would send a request for a DL check from Texas to us, we’d take that off the in-state machine and take it over to the NLETS machine and cut the tape and send it. Texas would get it and go through some similar process to ours and then send the information back to us, and we’d take it to one of the in-state machines and retype the response and send it back to whoever.

Did I mention you did a LOT of typing?

This, by the way, wasn’t Oklahoma being behind everybody else: a lot of other states had a very similar setup at the time.

So when we got the funding and got our first actual terminals- dumb terminals but still- we were overjoyed. There was a screen where you could type out the message and edit it, and a regular printer, and this all ran on a 1200-Baud analog line with modems; all smaller, faster and easier to use. It also interfaced with the state drivers license and vehicle files and the NLETS line so we no longer had to do all that relaying requests back & forth. This was, as I recall either late 1980 or early 1981 when we made the changeover.

That’s what that part of that job was like thirty years ago.

And personally I think all that typing on some of that equipment is one reason my hands are so messed up now(it took a while to get this typed out).

Damn, things have changed.
Posted by Firehand at 14:08

My first experience in programming, in 1980s computer class, involved a mathematics program on punch cards. God forbid they got dropped, as that was about a 2-inch thick stack. Made me excited as hell when my folks bought that super-modern Commodore 64 with the high-speed cassette tape memory.

I don't know about ASR-28s, but the ASR-33s I used in computer classes in the late 70s ran at 110 baud (which was 11 characters/second since as I recall they used the 10-bit Baudot code rather than ASCII). Our glass (dumb) terminals ran at 300 baud, except for the one or two 1200 baud terminals that the operators had.

Any of the above were better than using the punch-card readers to put a program into the computer.

At that time the garage kept their inventory of parts on punch cards, and the guys in the computer room had to run the things and print it out once a week. I remember one time the stack slipped; I think the walls around the area darkened slightly from the heated language.