Merry Christmas 'n all that

Right now it's cloudless and the sun shining down, and up to 21F. Which is a big improvement over this 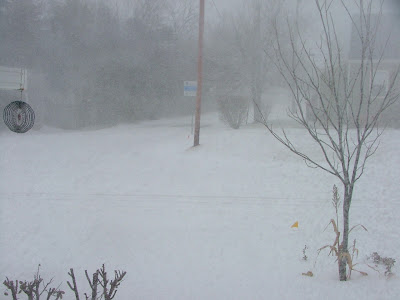 which is how it looked at the worst. Out on the highways and open areas where the wind had full sweep visibility just about wasn't; the NWS site showed .06 mile at that time.

The official total out at the airport was 11" last I heard, but as I noted yesterday it was spotty; several areas of really heavy with surrounding areas anywhere from 3 to 6". Hell of a snowfall for this state at this time of year in any case. At one point not only was the H.E. Bailey turnpike closed from Oklahoma City clear to the TX state line, but Fort Sill was sending out vehicles to rescue people stuck on it. Just checked, the Bailey pike is still closed and so are the interstates in Central OK; as much as anything so they can get stuck/crashed/abandoned vehicles off the roadways.

Out in the front yard this morning, I've got this 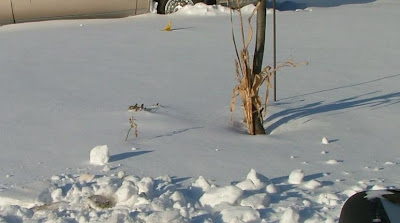 If you look on the left center, see that bit barely sticking out? That's one of the mini rosebushes I pruned back a week or so ago. It's about 8-10" high. Mind you, the front had wind swirling over/around the house and drifting stuff in. But in the back yard, fairly open space in the middle, it's about 8-10" deep, up to just over the tops of my boots. Security Staff, on patrol while I shoveled, 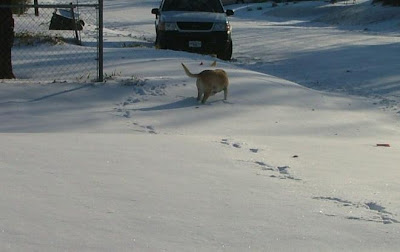 left tracks around the perimeter in back, but there was not a track anywhere else. Considering that it's up to her belly, I'm not surprised.

It's supposed to get into the upper 20's today, that and sun will do a lot to improve the roads.

One good thing: last year I'd have been at the Department wondering if I was going to be able to get home. Or back to work today, likely. That's one reason I had absolutely no sympathy for those effing politicians whining about "I want to be home for Christmas!" Well, clowns, there's been a bunch of them I had to work; so shut the hell up.

I think I'm going to make some hot chocolate. And put some feed out for the birds.
Posted by Firehand at 07:41

HEY! I've got that twirly thing hanging on my porch in the summer! And, God bless Miss Security.....she's shaped just like my Peaches was. It brought a smile to my face. I miss my baby girl.