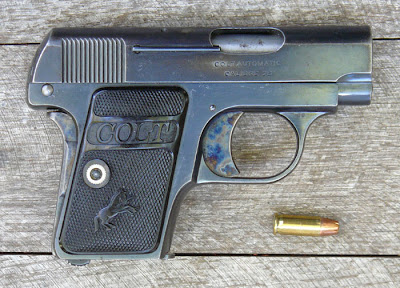 For the history on this little thing, go here(which is where I stole the picture from). It was designed around the cartridge(which JMB designed, too), as a 'stick it in your vest pocket/ladies muff just in case' pistol. I had a chance to shoot one last time I went to the range, and I liked it.

Take a look: the thing has a thumb AND grip safety, and being based on the 1903 an amazingly small number of parts, and even with the time it'd been around the one I handled was wonderfully fit(finish I'll get to later). And there really are sights! You just can't see them, and I include from firing position in anything except perfect light. There's a channel the length of the slide with a tiny little blade at the front and a tiny notch at the rear; why, I have no idea since even in good light if you're in a hurry you can't see the damn things. This is the classic of the pocket pistol: so small and light(for the time) you can always have it handy, and intend for up-close-&-personal self-defense. It's 4" long, 3" tall and a touch less than 3/4" thick, smaller in length & height than a Ruger LCP or KelTec P3AT, though about the same weight due to the steel frame. And the cartridge, of course.

Ah, the .25acp. What people really mean when they say mouse gun. In ball it's a 50-grain bullet- ten grains heavier than a .22lr- which is moving, in CCI Blazer(what the owner had), at a blistering 760 feet per second. Although CCI says their Gold Dot is blazing along at 900. In either case, not what you'd want to trust as your primary defense cartridge if you could get anything else; I'd assume a premium hollowpoint like the GD would expand somewhat, but still...

The thing was fun to shoot. Little recoil or noise, and it went bang every time with no malfunctions of any kind. Accuracy was about what you'd expect(from me at least) with a 'sight radius' that short; it's a good thing it points as well as it does. The biggest problem I had was getting a proper grip: the grip safety worked with no problem no matter how I held it, but if you stuck it in a pocket and grabbed, I almost always wound up with a grip that threw my shots to the left.

I have no idea what the going prices are on these, but I wouldn't mind having one; it's just so damn cute. If someone made it in .22 so ammo didn't cost so much, now THAT would be fun.


On the finish: it suffered from buffitis. Which is cause by
Finish is worn.
Somebody decides to refinish it(a worth aim, I think).
Said somebody decides to use a buffing wheel and goes to town and effs it up.
Seriously.
Buffing wheels are wonderful tools, when you know what you're doing and have the right wheels and compounds. If you don't, you'll screw it up; you'll round-off sharp edges, may actually sharpen rounded spots, and can damage or wipe out the markings on the slide and frame. Which is why a couple of gunsmiths use bad language when referring to these tools. I've done a lot of buffing on knifes, blades and guards and pommels; I would be very damn careful thinking about using a buffer on a gun. You need the right size, shape and material of wheels and have to know exactly what you're doing and how.

Buffing wheels come in sisal, loose-sewn cotton, stiff-sewn and/or glued cotton, and felt. And felt comes in soft, medium and hard. Any of them, used incorrectly, can screw up what you're trying to do, and do it fast. And they generate heat from the friction; early on I screwed up the heat-treatment of blades a few times and had to re-do that part of things, then polish it again. On the types and sizes, I once read of a man talking to a gentleman who worked at Colt for many years, finishing and polishing pistols; he said he had more than 30 different size, shape and consistency wheels and appropriate compounds just for revolvers.

So if you have an old one and decide to refinish it yourself, I have no problem with that; but take your time and find out exactly what do do first. There's a good chance you can do a lot of it- maybe all- by hand with wet/dry paper and appropriate backing. And if you hand it off to somebody else to do, make sure they don't consider "I'll just hit it with the buffer" to be the proper technique for everything.
Posted by Firehand at 08:21

Sadly, about three to four weeks ago my step-dad sold his for $350 to buy a new Browning Buckmark.