"What? Treat a TSA member as if he were one of the peasants?

We can't do that!"
You or I would've been hauled to jail; but
"I felt that this situation involving upper-management had the potential to give TSA Phoenix yet another public relations black eye. In an effort to avoid bad publicity for TSA, the TSA Manager, me and the checkpoint I told the X-ray operator to release the bag from the X-ray machine."
And of COURSE nobody got fired or demoted or any real punishment; they ARE official TSA Molester People, after all.


From the "We'll save you from Global Warmening!" people,
When I visited the House of Lords’ minister, Lord Marland, at the Climate Change Department a couple of years ago, I asked him and the Department’s chief number-cruncher, Professor David Mackay (neither a climate scientist nor an economist, of course) to show me the Department’s calculations detailing just how much “global warming” that might otherwise occur this century would be prevented by the $30 billion per year that the Department was committed to spend between 2011 and 2050 – $1.2 trillion in all.There was a horrified silence. The birds stopped singing. The Minister adjusted his tie. The Permanent Secretary looked at his watch. Professor Mackay looked as though he wished the plush sofa into which he was disappearing would swallow him up entirely.Eventually, in a very small voice, the Professor said, “Er, ah, mphm, that is, oof, arghh, we’ve never done any such calculation.” The biggest tax increase in human history had been based not upon a mature scientific assessment followed by a careful economic appraisal, but solely upon blind faith. I said as much. “Well,” said the Professor, “maybe we’ll get around to doing the calculations next October.”They still haven’t done the calculations – or, rather, I suspect they have done them but have kept the results very quiet indeed. Here’s why.
Added: DaYUM, it's cold out there!


Schumer shows us- again- what a slimy little bastard he is.

Over the last couple of years I've seriously pissed off some people by pointing out what WUWT notes: a lot of the same people screaming "GLOBAL WARMERING!!" now were, when I was a teenager, screaming "GLOBAL COOLING!!"; and a lot of their 'solutions' then were the same as now. It's like they have a vision for which anything will do as a reason to implement it...


I haven't been around the 'carry & care for the baby' situation in a long time; this sure isn't something I'd have thought of: the Tactical Diaper Bag.


Ok, I have another possibility for the '5 if you had a pile of cash to spend': a Hotchkiss Revolving Cannon. Put that sucker on a trailer and take it to the range. And if I had the money to buy and feed this thing, I'd have the money for a suitable range, too.

Which brings to mind: if you've ever been to the 45th Infantry Division Museum, the start of the trail outside is flanked by a pair of these M3 37mm Antitank Guns(something else I'd love to have in operating condition). I once talked to the guy who brought one of them to the museum from where it'd been at the Altus Air Force Base: he hitched it to the back of a pickup(which had state markings) and drove it back. Said the drive was worth it just for the looks he got...


PBS had a show on wolverines the other day, interesting to say the least. However, they threw in a obligatory "But globular warmering will ruin the climate they require to survive", etc. Amazing how they will talk about how tough, capable and so forth the critters are, but assume a change in climate will do them in; how the hell do they think they survived all the climate changes of the past?


New Radom pistols? Cool; friend has one and says it's the best 9mm he's ever fired.


Ah, so Nanny and Mumbles are only putting on their commercial in the DC area; I'd imagine a conversation along the lines of "The commoners won't pay attention and do what we want, so let's target this on other politicians."


Pizza; I want pizza. But don't have proper pizza stuff here, and after the vehicle trouble really don't want to spend that amount of money on one(dammit, I LIKE Hideaway...). Also it's overcast and chilly out there, which is making my joints ache; to the kitchen it is.

Added: I could not pass up throwing this in: 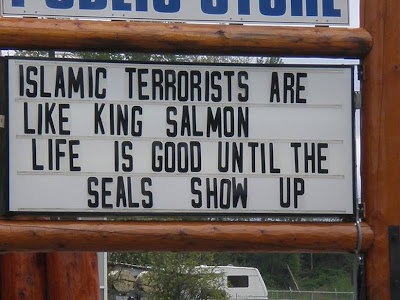 Found at this guys' place; some post may be NSFW