In today's "the MSM is worse than you thought possible" news, one media outlet is caught on tape plotting to tie Joe Miller to child molesters, while another "forgets" to run Christine O'Donnell's big 30-minute ad... twice. The day before the election. Reality truly is stranger than fiction sometimes -- if you wrote this kind of media bias into a script people would tell you it was too crazy to believe. And yet it happened.
and
Andrew Breitbart had been asked to participate in some sort of "digital townhall" and provide commentary during the night. After the typical caterwauling of the censors of the left, ABCNews has withdrawn the offer, apparently, or at least guaranteed to the lefties that Breitbart will not appear on TV. After ABC claimed he was never to appear on TV -- they claimed he would just be hanging out at the online forum or something -- Breitbart produced an email from them contradicting them.

Remember: every time you remember one of these 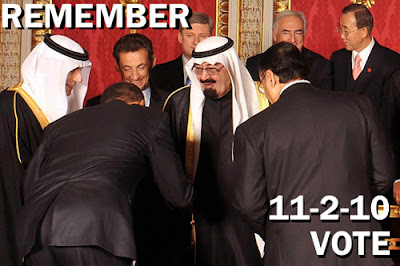 and vote against him, a progressive cries.
Posted by Firehand at 14:31

The MSM's coverage (like everything else) has to serve THE Great social project (greater good etc).

That, Great Project, is embodied in the person and in every thought of your Dear Leader, and those who serve him (sorry err, that should say "serve the greater good").

To allow criticism of Dear Leader, or the great project to be aired, would be to oppose it, and that would be unthinkable (and unforgivable).

Censorship, it's the New(tm) freedom of expression...