"The revolution will not be televised... But it will be blogged"

as the man from the Volksrepublik puts it; just scroll down.

It's been interesting to read newspapers and media weenies here talking about 'thousands' or 'tens of thousands' while stuff from Britain flatly gives estimates of '1.2 to 2 million'; it's like the in-country media outlets don't want to acknowledge- or admit to- the real numbers.

I include in the 'not be broadcast' a lot of the RHINO weenies who're just about to wet their pants in outrage that people who don't agree with- or answer to- them are daring to actually make their thoughts known.

The Geek points to a three-panel declaration of what's become the case: 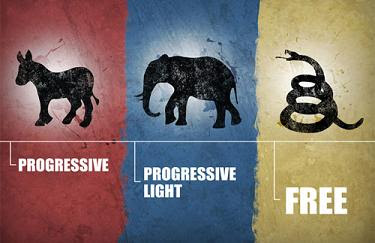 If there's a shirt with that on it, I'm buying it. It'll go nice with my "Old School Conservative" Reagan and "Peace Through Superior Firepower" t-shirts. Nothing like walking around Iowa City, in the People's Republic of Johnson County, in garmentms that piss off the Commu....progressives.

Ya need to go to http://www.cafepress.com/
and make that into a t-shirt.