Scott Reichek gave permission to put the whole thing up, so here it is:

This one’s been brewing for a couple of weeks now. I continue to be shocked how the left is so totally sold of disarming itself. I asked myself how it is possible that a political segment so rife with actively oppressed people could be on board with this. I’m especially flabbergasted that they could be okay with disarming people who have been placed on a secret list that is created without a single judge even reading the names. Finally, I came up with an answer: Stability Privilege.

FOR ALL MY CONSERVATIVE/LIBERTARIAN FRIENDS...STAY WITH ME. THERE’S A LIGHT AT THE END OF THIS TUNNEL.

For those who need an introduction, the concept of privilege is that, due to circumstances beyond their control, society benefits certain people in a way they did nothing to earn themselves. The corollary concept is that due to this “privilege,” those people with it find it nearly impossible to imagine the world as it genuinely exists for those people without it. This concept is wildly popular with the American left, and has some limited validity.

The American left supports gun bans, magazine bans, and the abolition of the 2nd Amendment wholly as a function of what I’m calling “Stability Privilege.” Almost no one out there on the left can remember a time when America was not economically and politically stable, relatively speaking. It’s been half a century since a president was assassinated, and even then, the transition of power was seamless. It’s been a little less time since a president was forced out of office. Again he left quietly, not a shot fired, with the reins passing quietly. It’s been at least 70 years since the last time American citizens were rounded up and placed in prison camps without so much as a hearing, and we haven’t had a food riot in anyone’s recent memory.  The American left wakes up every day in America confident that the stores will be open, there will be food in them, and that no one will be rounding them up today to be shot for saying something controversial...and that’s the problem.

The American left exists in a bubble that doesn’t exist outside of CONUS (Continental United States...for the uninitiated). They don’t believe they can be rounded up and shot, because “that could never happen here.” They don’t believe someone would break down their door for the food in their pantry, and slaughter them if they resist. They don’t believe they could be rounded up and raped by the truckload for worshipping God differently than their next-door neighbor. They don’t really believe that any of these things are happening anywhere. If they do on any level, they seem to think they can hashtag it out of existence. They believe all of this because of their stability privilege, because they’ve never seen it with their own eyeballs, and so they think “It can’t happen here.” All they’ve seen themselves is firearms misused near them, and so that is the one thing they can wrap their heads around. They don’t see the use, the purpose, the importance of the 2nd Amendment and modern arms.

I came up with this idea because there ARE so many on the left, so many populations they pretend to serve that ARE being actively oppressed. It floors me that the same woman who was told, “maybe you shouldn’t have worn that dress,” actually buys it when they tell her that she’s being made helpless “for her protection.” It floors me that a LGBT community that has people actively murdering them in broad daylight while the police and judiciary still winks at the murderer and lets him off light, actually BELIEVES it when they’re told they’re being disarmed, “for their safety.” It blows my mind that there is an African American community still getting crosses burned in their yard and their churches burned down, that still totally swallows it when a candidate pushes to make them even more powerless, and says “To make your neighborhoods safer.”

I remember that I am related to people I will never get to meet, because they were never born, because their would-be parents were rounded up and shot in Russia for being Jews. Try to remember that Sarajevo once hosted an Olympics. Remember that Beirut used to be called “The Paris of the Middle East.” Remember that women used to wear lipstick and miniskirts in Tehran. Most of all...remember that it CAN happen anywhere. It can happen here. The bubble can break. The bubble WILL break. 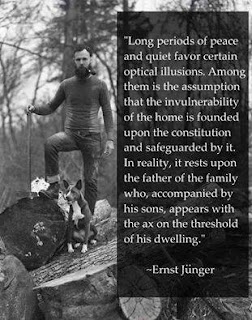