Mr. Hilton, the only part you needed to say was

"I am gay and Islamic State are throwing gay people off roofs before stoning their bodies, so I am not going to apologise for wishing that Jihadi John and the murderous Islamic State were not around," he said.
Really, UKIP?  You're worried about him saying this about a nasty IS murderer?  Tell the whiners to kiss your ass.


Yeah, war between hispanic and black gangs isn't the kind of thing the multi-culti people would want talked about.


The portrait of Bloombergs' chief minion: 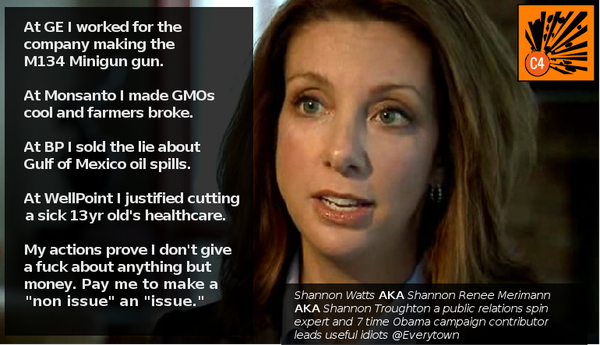 Yeah, the ultimate aim of this is to ban as much ammunition as possible.  And since they know it wouldn't get through Congress the "We must disarm the peasantry" clowns at ATF and EPA(with a little 'Ban it for the CHILDRENNN!' at EPA) will try to do it by 'legislation by decree'.


Ah, so THAT'S why Obama & Co. are so scared and pissed about the Netanyahu visit.


Yeah, not a Sharpton fan:
Appearing on CNN’s “Reliable Sources” Sunday morning, Allen was angry particularly over his belief that a number of corporations ignore other black figures but do business with Sharpton because he’s the “least expensive negro.”

Host Brian Stelter pushed back on the claim, but Allen only doubled down, saying the corporate mentality is “don’t do business with real African American-owned companies, just give him $50,000 and a bucket of chicken and we’re good.”

On Bebe, I hope that one of the bombs he is going to drop is that Obama threatened to shoot down any Israeli planes on their way to hit Iran (like has been reported in a Dubai newspaper).