This is one of those "I needed to make something, so I'm writing about it" posts.

If you'll look at the pic below, you'll notice that the inside of the die body is hollow in the lower section, top section is threaded inside, and in between 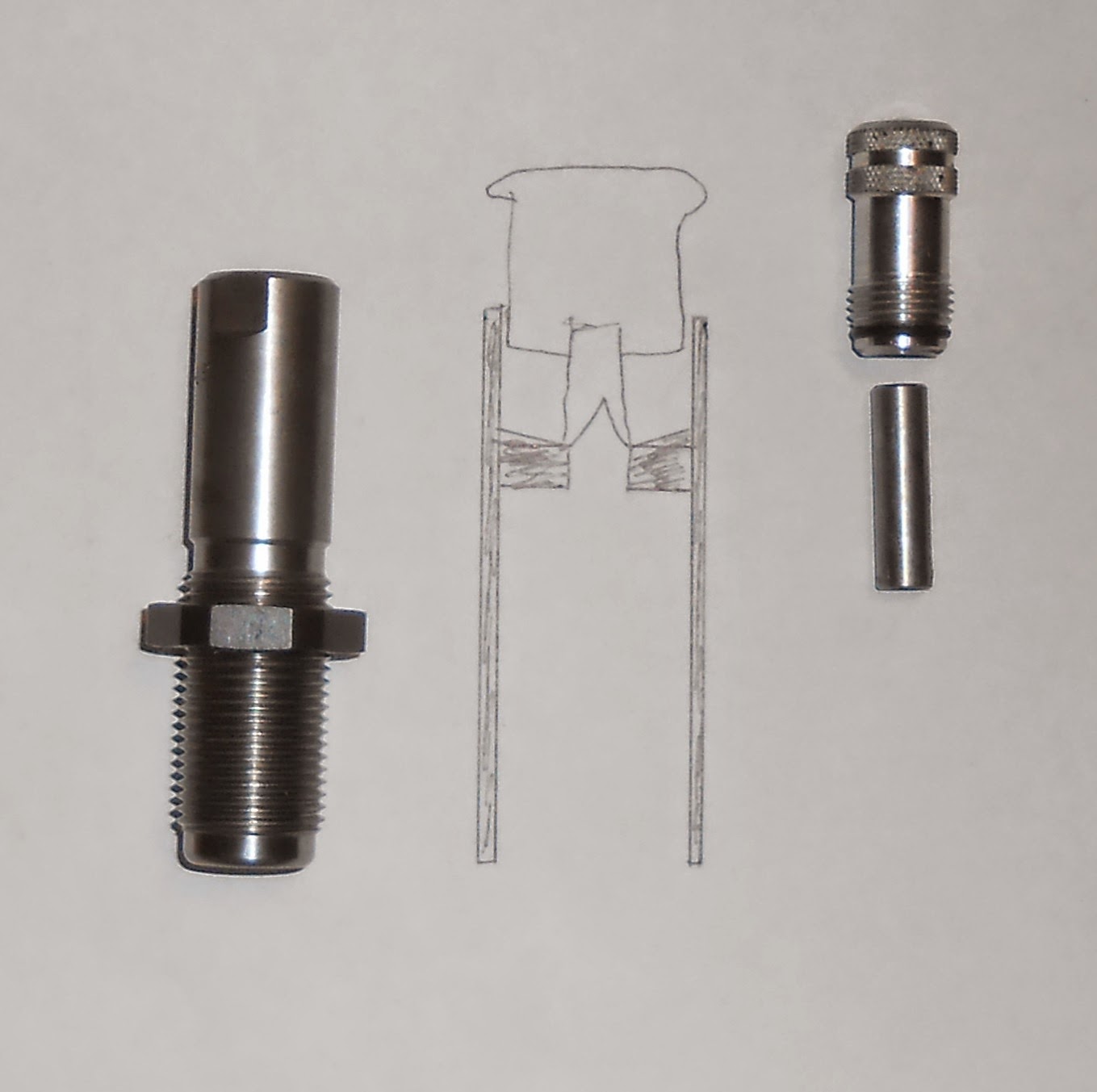 is a divider with a hole in the center.  The threaded top piece is to adjust the travel of the seating plug, which is a piece of steel rod with a conical hole in one end to fit the bullet nose.  It's just slightly larger in diameter than the hole, so it stays in the top section.

Normal use, no problem.  Start messing with larger-than-standard and short bullets, like the .32-caliber pistol stuff I've been using for light loads, two problems:
First, those larger-diameter bullets* don't want to fit through the hole well; they tend to get slightly stuck, which causes from annoyance all the way up to "BLEEP-DAMMIT!"

Second, those wadcutters?  That seating plug cannot seat them as far down as needed.  Which necessitated some squirreling-around with a different cartridge die to seat them.

Yes, you could drill the hole out a bit.  This being a heat-treated die, I kind of hate to start trying that.  Plus if you do that, the seating plug will fall through.  So what you need a different seating plug.

So I hied myself off to the lathe, and finally produced these: 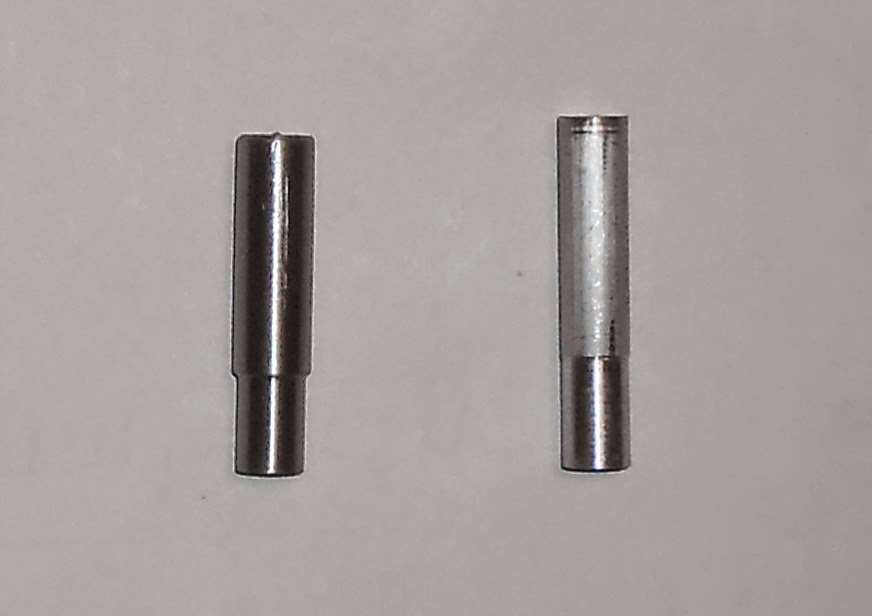 The one on the right is aluminum with a flat end for seating short flat-nose or flat-end stuff; the one on the left is steel with suitably hollowed-out end.  Both have the main body, then a step down, then the part that will fit through the hole in the body.  The step will keep them from falling through, the extension will allow seating the very short bullets, and with the conical hole in the steel one it'll seat standard bullets.

I could probably use aluminum for both.  I was worried that, with the hollow-ended one, thin as the walls would be toward the mouth, aluminum might wind up being expanded a bit with some bullets; so flat-face for the wadcutters and such, steel for the other.

Making the hole was fun.  Wound up facing-off the end so it'd be flat and square, which also marks the center nicely.  Centerpunch to set that spot. then use the drill press do drill in about 3/8"(actually a bit more, ought to measure it).  Back to the lathe, adjust the compound rest, which both slides back & forth and holds the tool post which holds the cutting bits, to a very shallow angle, and used a bit I'd ground long and thin for a different project a while back.  Move the bit well into the hole, move it toward me until it contacts the inside, then back it out at an angle so it cuts the hole into a tapered shape with a few passes.  Yes, sounds kind of confusing, I'll try to take a picture later so I can label all this.

Anyway, it solves the problem.  And I now have some more test ammo loaded.  Which may take a while to use, as it's misting outside; supposed to stay above freezing tonight(hope they're right), if it does may be able to shoot tomorrow.  If can't then, Wednesday is going to suck(snow and sleet) so it'll be sometime after that.

*This also occurs with some normal size(150-grain and up) cast bullets sized .311"

Your lathe doesn't have a tailstock? Or no chuck for it? It'll take some fiddling around to come up with something that works but holding the drill in the toolpost works okay if you don't need (as here) a particularly great hole drilled.

Tailstock, but no chuck. And the taper on this thing is different from anything available, that I can find at least.

I can't imagine not using a morse taper there - Unless the thinking was it would be just used for mounting a drill chuck, In which case it might be a Jacobs taper. Did a matching center come with? If you want to post some measurements I can take a shot at figuring out what it is.