Sen. Warner: a true follower of the taqiyya President

“Optima has informed us it is going to be canceled next year. They gave us ACA compliant options. We are not eligible to for subsidies because I do get offered a ‘family plan’ at work and by ACA rules only the employee portion is factored in when calculating whether the plan is ‘affordable.’ The closest plan is a $3250 individual/$6500 family deductible for $674.39. That is a 325 percent increase in our premiums!” the Virginian wrote. “The worst part is that I wrote Senator Mark Warner and told him about this.”

Records reveal that Warner, who voted for Obamacare, previously vowed to oppose any reform that would cancel Americans’ pre-existing plans.


The God-kinglet made another decree; get ready to get screwed some more on energy.


Judge Duffey: one more dirtbag in a black robe.


More on that 13-year old shot in California:


He once accidentally shot himself in the leg in 1995 while on duty with the Sheriff’s Office – reportedly while holstering a gun. However, officials said he has not fired upon a suspect in 24 years with the agency, where he serves as a field training officer for new recruits and trains colleagues to shoot at the department’s gun range.

This is just too good. He is an expert on firearms – and he shot himself in the leg. So let’s cover some details on the shooting itself.  Here is the one you really need to know.


Ethan Oliver, who lives across the street from where the shooting occurred, said he heard two gunshots, and while Lopez was on the ground the deputies “went at it again and unloaded like six to seven shots,” KTVU.com reported.


That picture of the cop sticking a rifle in a guys face?  A bit more background:


Four law-enforcement officers were wounded Friday in a suburb of Sacramento, Calif., during an attempt to take a wanted gang member into custody.
The shooting occurred in Roseville, a suburb about 20 miles northeast of the state capital.
Helicopters circled overhead and armored vehicles and other police cars flocked to the area following an initial report that a U.S. Immigration and Customs Enforcement agent had been shot.
A sporadic gun battle lasted into the night and the commotion snarled traffic for hours. Police responded by setting up a checkpoint and pointing guns at motorists, as this Associated Press photo shows. 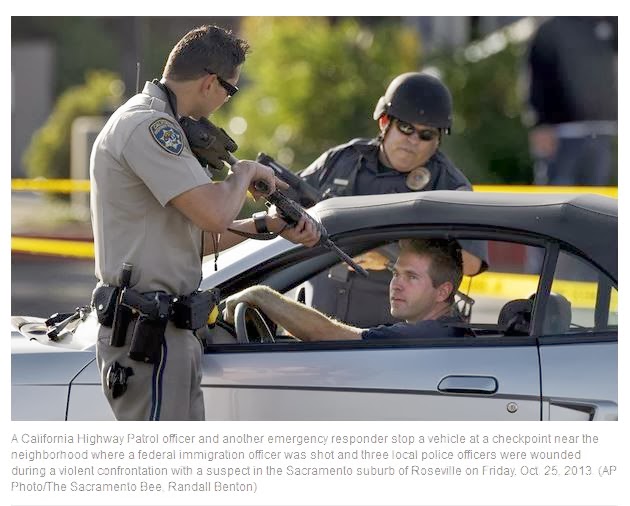 Because nothing says Protect and Serve like endangering lives for the offense of having to drive through a checkpoint.


You can't be trusted to carry a gun for self-defense on campus, but they don't even have a duty to WARN you, let alone protect you...

(forgot to post this earlier, so it should've been BEFORE the 'screw it' pictures; oh well)
Posted by Firehand at 13:33

That rifle in the face says it all. Britain and the united state aren't so different in that respect. Here's another one from two or three years back, finger on the trigger and peering down the scope, really good situational awareness;
http://billorites.blogspot.co.uk/2010/09/firearms-safety.html

There was a friend of my parents, who was a mid level cop - in charge of a few cop shops at one point.

Back when the Apartheid regime was falling to bits in South Africa, and the tv had footage of cops in land mine proof armoured vehicle jumping out and bullying the crap out of people,

he pointed out that any semblance of discipline had gone from them, and would never be regained, the regime was crumbling, they were not ordered cops, they were just a mob of bullies, The uniform which identified their role within the organization of state, was being ignored.

The same thing can be seen in some of the other pictures on the BBC site where Bill O'Rites got that image.

the regimes over us are going the same way. we live in interesting times.

Your tirade about the recent Va Supreme Court decision is just that. Case law Fron SCOTUS and the Va Supreme Court has been saying that for decades - the duty is to society and not to any specific individual.

I do agree that individuals should have the ability to provide for self defense using the most efficient means. And as long as you are not a student, faculty or staff member you can do so outside the buildings - where most rapid multiple murders do not take place.

What Virginia needs to do is extend the existing firearms preemption law to state agencies. It works pretty welll in dealing with local government.