A little while ago I became the owner of a Colt Model M in .32acp. 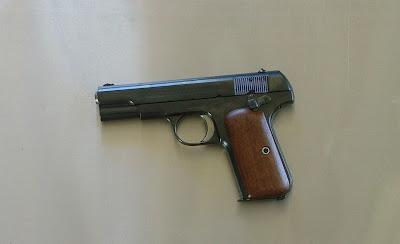 It’s as much a joy to shoot as the .380 I lucked into a couple of years back, but does share one problem: the sights suck.

I know, I know, “It’s for up-close-&-personal self-defense, that way it doesn’t snag in a pocket” and so forth. All true. I still want better sights, at least in front, which led to an idea.

Before anyone starts screaming, this is not a case of damaging a collectable: at some point, trying to ‘repair’ damage caused by pitting(looks like it spent a lot of time in a pocket or tucked into a belt) someone with a very heavy hand went after it with a buffer. Half the markings are almost obliterated, the others damaged. Add to that a bore that wasn’t cleaned after use with corrosive-primed ammo(there is rifling there, in between all the pits) and this is a shooter, not a collector’s piece. Which is fine, I wanted a shooter, and I’m going to improve on it a bit.

Realistically, the big factor is going to be a front sight big enough to see, and a rear that makes using it fast easy. There’s a couple of options I could go with, I’m going to try this: 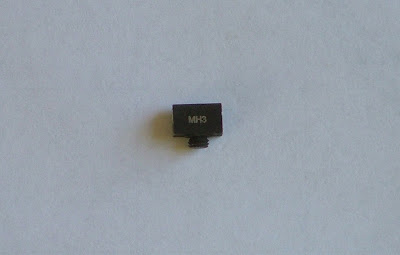 Yes, that’s a Mepro shotgun sight. Friend and I discussed this, and I think with a .32 the shank should be plenty to handle the stresses of the slide cycling, and it’ll be a big, bright dot in bad light, 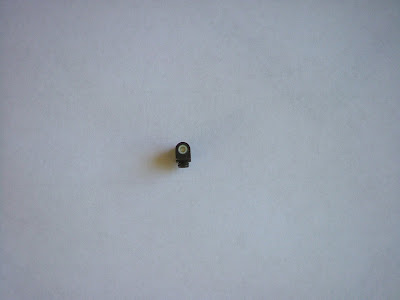 What if this doesn't hold up? I'll find something suitable and cut a dovetail for it.

Suggestions, imprecations, bad language and so forth appreciated. Some parts of that more than others.
Posted by Firehand at 18:30

Marbles has ivory and "gold" bead front sights plus fiber optic. Still these guns are designed for minute of belly shooting. I like precise sights on target rifles and pistols. An arm that will never be used at ranges further than across a room? Not so much. You won't lose collector value. what you will lose is the ability to stick it in a jacket pocket and know that you can pull it without a snag.

I used to have a three inch S&W Model 60 with target sights. I ended up giving it to my daughter for a bedside gun while I replaced it with a Ruger SP101. The target sights were the reason. They kept snagging when I drew from a concealment holster.