DIE!" from the usual suspects- as noted by Steve- and has managed to deliver rain, wind and maybe some flooding. In the meantime, outside, 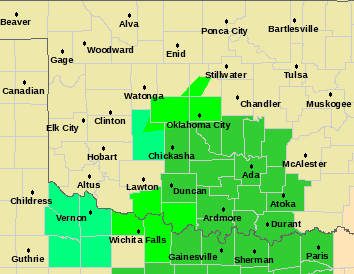 Light green is flood warnings, dark green is flood watch. A little west of here, El Reno and Yukon have had 7" of rain. So far. For the next day or so,
Today: Rain and possibly a thunderstorm. Some of the storms could produce heavy rainfall. High near 73. Southeast wind between 6 and 10 mph. Chance of precipitation is 90%.

Tonight: Occasional rain and possibly a thunderstorm. Some of the storms could produce heavy rainfall. Low around 64. East wind between 6 and 8 mph. Chance of precipitation is 80%.

Wednesday: A 50 percent chance of showers and thunderstorms. Cloudy, with a high near 77. North northeast wind between 5 and 7 mph.

Wednesday Night: A 30 percent chance of showers and thunderstorms. Mostly cloudy, with a low around 65. East southeast wind between 3 and 8 mph.

So sayeth the weather weenies. I may be wishing I'd kept that bass boat a few years back.
Posted by Firehand at 08:18

Home on the Range said...

I landed in the upper left light green county a couple of days ago, then dashed out again. I was amazed by all the standing water. That's not usual. Was nice when I left, hope it stays that way.

Not usual around here at all, outside of ponds and lakes. That much comes down that fast, it just can't go anywhere fast enough.

The lakes & etc. were a touch low after July and the first of August being hot & dry, this has topped them off. And out in the panhandles, OK and TX, places that had been in drought conditions got multiple inches over a couple of days. Of course. Couldn't just have a slow, soaking rain, oh no...