Ran into one of these the other day, in .38S&W, and had the chance to shoot it 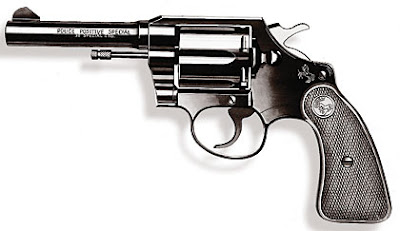 Colt started making these in 1908, from what I can find, and continued until the '70's. They made them, over time, in .32, .38S&W and .38 Special. This one was marked '.38 Colt NP' and '.38 S&W CTG' on the left side of the barrel; .38 Colt NP(New Police) being the .38S&W cartridge with a different headstamp. Not a lot of holster wear, some light rust marks on the outside, the bore and chambers were spotless. The cylinder locked up like a bank vault, and the action was smooth and light. And it was marked on the backstrap with 'RHKP', which seems to mean it was at one time issued by the Hong Kong Police.

Shooting it was nice. The trigger broke cleanly at about 3lbs, the double-action was smooth, and accuracy at about seven yards was nice; about 2-3" groups. Which with these grips, small in my hand, was good for me shooting offhand. The only problem I had was it tended to ride up in my hand on firing; if I had one, I'd get some walnut and see if I could make a pair that filled in at the top rear of the frame, to keep it from doing that.

A fine old revolver, indeed. And, I realize, it's the first Colt I've ever fired.

Oh, not surprisingly, found that Kim had posted on it here.
Posted by Firehand at 11:25