Ran across a few things I've got to list

First, advise to tourists in Australia: 'Apex Predator' means exactly what is sounds like: 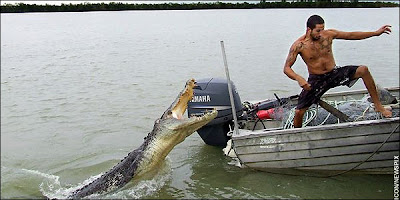 Next, it appears Colombia isn't going to back down from Chavez & Co.:
"Colombia proposes in the International Criminal Court to denounce the president of Venezuela Hugo Chavez for sponsoring and financing genocide," Mr Uribe said.
Mind you, the ICC will be nothing but a place to make the accusations 'official'; otherwise, the ICC will be the same teats on a boar hog it's always been.
Venezuelan troops were reported to have been moving towards the border. Colombia, which has armed forces twice the size of Venezuela's, has said it would not be provoked into mobilising troops in response.
Translation: "We're not going to do something flashy and give that jackass something else to scream about. We're already prepared, and if he steps over the line we'll kick his ass." However you put that in diplo-speak.

Anybody who goes anywhere and thinks they can roam about with no consideration for personal safety is asking to get hurt.
Last night however, the chief minister of Goa, Digambar Kamat, was reported as saying that foreign women who visited the state should take more responsibility for personal safety.

"Foreign tourists have to be careful," he said. "They can't just do these things and then blame the government for the consequences. You can't expect the government to provide police on the beaches after midnight."

He warned foreign women in Goa to avoid "insecure places" and to take "precautions", but declined to define either.

Mrs MacKeown, of North Devon, who was due to meet Mr Kamat, said it was the responsibility of the government to ensure the safety of visitors.

"If they are saying it's dangerous, then it's the government's responsibility to warn people," she said. "Instead, it's advertised as a hippy paradise."
Madam, an awful lot of 'hippy paradise' places turned out to be damned dangerous. I agree that a government has a responsibility to look to the safety of people, locals and visitors both; that does not mean they can make it completely safe. All around the world, teenagers and others tend to find out the hard way that 'popular destination' includes 'for predators who go after people like you. Especially young females who drink a lot'. No matter how nice the place.

Speaking of fidel's buttmonkey, here's some thoughts on what the monkey is hoping to accomplish, and why he's worried.

Back at home, some people in Congress are actually wanting to do something about the border:
The first initiative involves one of my favorite GOP Senate members, Jeff Sessions of Alabama. He is rolling out nearly a dozen different bills addressing specific border security and enforcement issues. The plan is to announce the campaign tomorrow.
Which is good. Especially when people like Reid are getting advice like this:
...A confidential study assembled for the Democratic leadership earlier this year urged them to start using tougher language. Democrats have focused on offering opportunity to immigrants, but the study by two think tanks urged them to begin speaking in terms of “requiring” illegal immigrants to become legal and about what’s best for the United States.
'Tougher language'. 'Speaking in terms'. Translation: "Say things to make the bigots and racists(D definition: anyone who doesn't want to do what we say) happy, you don't have to mean it."

I'll close with this post from Kim, on what'll happen if the Obamessiah wins.
Posted by Firehand at 06:08