I've been told .45-70 is pretty sensitive to slight changes in load, so it might take some experimenting to find what a rifle really likes.  Evidence being these two pictures

There's one difference between the two sets of five cartridges, and it's not the powder charge; it's the crimp.

Previous best try with this bullet was 67.0 of the same powder with sufficient compression to seat the bullet to the same point.  Not bad(if you discount the one I pulled high), 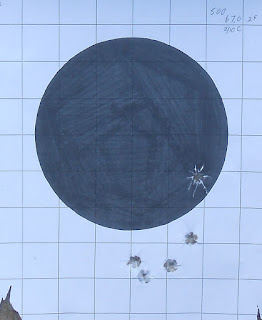 but not nearly as good as the 68 with crimp.  And yes, I'll have to shoot that combination again to see if this was chance or a consistently good load.

That 67.0 load, when I was able to chronograph it, used Goex powder and averaged 1189fps.  The 68.0 loads averaged 1095(without crimp) and 1090(strong crimp).  So the Graf & Sons powder is giving quite a bit lower velocity even with a grain more.  It doesn't seem to produce any more fouling, and between the bullet lube and using a blow tube the fouling isn't any worse that the Goex.  Interesting.

If you're wondering why different brands, I ran out of Goex and I couldn't find any at the time, but the Graf was available so decided to give it a try.

If you're wondering about the mention of compression, black powder burns more efficiently when compacted.  Standard seems to be first using a drop tube, a long brass or aluminum tube with a funnel on top that'll either have a funnel on the bottom to make sure the powder goes in, or will fit into the case mouth: weigh the powder, then slowly pour it into the tube so it falls the length and packs itself into the case.  Then you use a compression die to compress it further.  Basically, take a case mouth expanding die, replace the expander plug with a flat-bottomed one that fits into the case, and use it to compress the powder to the degree desired.  And yes, the sound effects are interesting.

In the case of someone wanting to shoot long ranges, this also allows you to put more powder into the case, so as to get the highest velocity possible.*

So looks like with the Graf powder, at least with this charge, a good crimp makes a big difference in accuracy.  I do wonder about going up a bit more with the charge, I'll have to think about that.  And that covers the black-powder part of the day.


*Another reason for 'no crimp' on their loads; they seat the bullet as far out as possible without it actually going into the rifling so as to have more room for powder.
Posted by Firehand at 07:29

Post-graduate physics is easier than aligning all the variables of a perfect load., and just wait until you progress past half-grain increments and get into tenth-grain; that's when the real 'fun' starts... Proper crimps give you a consistent burn. If the crimp is too loose (or neck tension too loose), the primer will pop the bullet and powder out of the chamber before proper ignition.

On smokeless I've always been taught that some degree of crimp is necessary. Then you get to black... there's a very good 'getting started with black powder cartridge loading' I need to post the link to(I'll add it), and a lot of the high-ranking long range guys load so that if you turn the cartridge upside down the bullet will fall out. Because 'You can't get a crimp precise and uniform enough on all rounds, so don't crimp.'