What we're dealing with

Again, consider the profound ignorance and irresponsibility of Thomases having not even read the Second Amendment, and then, after being chided into doing so, presuming to be an instant authority on founding era intent. Then consider this was someone with national reach and access to the highest levels of government and the press, whose opinions were widely amplified by "legitimate media" and exploited by opportunistic office holders.
This is political malpractice on all levels, and outrageously, it’s the norm, and represents the totality of what many Americans are exposed to of the so-called “gun debate.”
“Oops,” indeed.


Bureaucracy in action; and remember that these are the assholes the left wants in total control of health care.

Note: few years back son was home on leave and needed to renew his drivers license.  Except now it was no longer good enough show YOUR ORDERS from the military, etc.; oh no, you need either a birth certificate or passport.  And if it's the passport, you can't use that at the tag agency, you have to go to the freaking DPS main office.

For our own good and safety, of course.


Even for New York Effing City, this is amazing:


Initially Mr. Broadnax was arrested on misdemeanor charges of menacing, drug possession and resisting arrest. But the Manhattan district attorney’s office persuaded a grand jury to charge Mr. Broadnax with assault, a felony carrying a maximum sentence of 25 years. Specifically, the nine-count indictment unsealed on Wednesday said Mr. Broadnax “recklessly engaged in conduct which created a grave risk of death.”

“The defendant is the one that created the situation that injured innocent bystanders,” said an assistant district attorney, Shannon Lucey.

And just how were they injured?  By two NYPD cops who shot at him and missed.  So HE'S guilty of assault...

Speaking of NYPD shooting,
...Overall the NYPD usually requires about 331 rounds to hit 54 targets, of which 14 will be innocent bystanders, 24 will be dogs, and 16 will be people the NYPD was actually aiming at. Statistically, if you aren't a dog, it is slightly more dangerous to be the person the NYPD was shooting at than a bystander (16 people out of 331 shots for intended targets for a 4.8% hit rate vs. 14 people out of 331 shots for bystanders, a 4.2% hit rate.) NYPD has a better success rate for other weapons, and certain factors, like shooting unarmed people in the back, tend to increase hit rates.


In the current "OH GOD IT'S A WINTER STORM!!" mess, here's what we're looking at here: 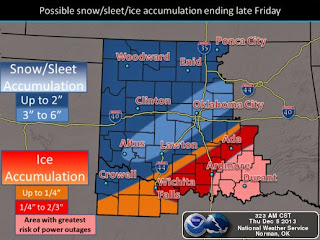 And it has begun 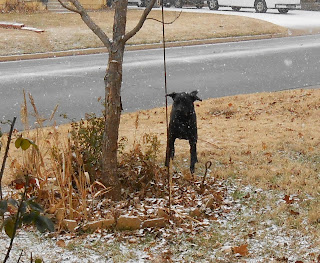 Security Staff(Sr.) was curled up in a doghouse full of straw saying "Screw running 'round in that."
And within five minutes it was snowing about twice as hard and bigger flakes; going to get interesting.


And we're supposed to trust the dirtbags putting the 'no-fly list' together why?


Bloomberg, MAIG and corruption; they just go together, don't they?