Test 2.0 on the brass catcher

And the plated bullets, let's not forget them.

Start with the bullets:  Good stuff.  Loaded in full standard-ball loads, no sign of nasty copper fouling.  In fact, the bore looks very bright and clean; notably cleaner than after cast bullets, even with a gas check.  Accuracy seemed identical to ball, at least from what I can tell at this range.  All in all I'd recommend them.

Now to the brass catcher:
The improved version works better than Version 1, and is a lot more stable; that stiffer wire makes a big difference.

Here's another shot of it in place 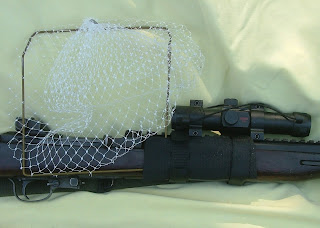 Here's the whole unit off the rifle 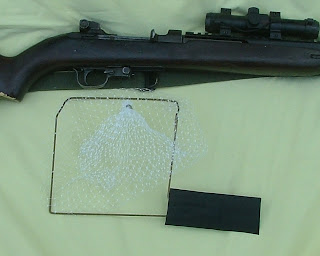 What goes over the ends to hold them in place and protect the stock is a strip of 2" wide velcro.  The two straps that hold it in place are 6" long pieces of 1" velcro; the two sides are overlapped about 2", which leaves plenty of length to go around and strap it down.

Here's what it looks like with the wire(mostly) bare. 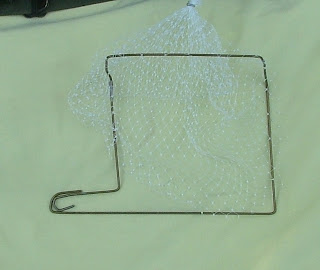 The netting is the plastic that came over a turkey breast; very light, and has no problem stopping the cases.

I'm thinking that you could make it a bit more rigid with a longer piece of wire: have both ends extend from the bend all the way to the start of the open box.  Be that as it may, the thing stayed in place during firing, from a rest and from standing offhand position.


Due to the ejection angles mentioned in the original test, it doesn't actually catch many of them; most hit the net and bounce back, falling to the ground near your feet.  Which is fine for me; long as they don't go flying downrange where I can't get to them(or find them as the case may be).  I did lose two cases that managed to skim just past the front edge and continue forward; I could see them, but with other people on the range no way to get to them.  That's a LOT better than the usual loss number.

I'm wondering if some kind of nylon or light cloth mesh that only attaches to the front and top would work better; it would be looser, and might better trap the cases and let them fall down.  And it wouldn't be a bag, so it'd be easier to make and put on.  Easy enough to try, so that'll be done in the future.

Don't know, but I doubt such a setup would work well on a Garand: much heavier case ejecting with much more energy.  With a heavier frame it might; may have to try that one of these days.

You've got a Picatinny rail on the rifle; might it be feasible to use a very low 45 degree offset mount on it to hold the catcher, or perhaps just a mesh deflector (I'm thinking a piece of plastic colander or similar)?

It's a Ultimak optics mount, which has worked very well.
Don't know, it's something to think on.